Update: An arrest is made in connection with the Wheels of Soul Motorcycle Club double murder in Camden 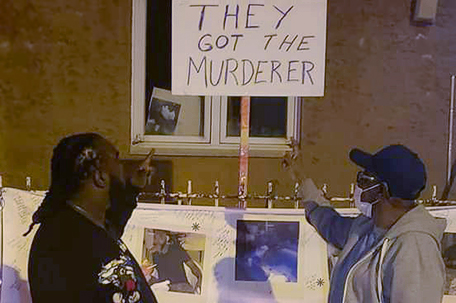 ABOVE PHOTO: David Wilkes and his younger son Norman Green hold a celebration on November 20 over the arrest of his son’s killer. (Photo courtesy: Napoleon Kingcade)

Two weeks ago, David Wilkes and his family decided to have a big celebration. On November 20, they received the good news that an arrest was made in the double shooting that took the life of 38-year-old Jermaine Wilkes and 32-year-old Jamill Jenkins during the early morning hours of September 20. David Wilkes was so happy with the news,  that he had tears in his eyes.

Authorities in Camden County have arrested and charged 40-year-old Loring Lindsey in connection with the double murder that left two men dead after a fight broke out at a party inside the Wheels of Soul motorcycle club. The arrest was made on Friday, November 20 –the same day the Philadelphia Sunday SUN first broke the story in the paper.

Lindsey, of Camden, was charged with two counts of first degree murder, two counts of second degree unlawful possession of a weapon and other related charges. He was arrested inside a home on the 1900 block of Pierce Street in Camden, New Jersey. He was then taken into custody by the U.S. Marshals Fugitive Task Force and transported to the Camden County Correctional Facility where he’s awaiting a detention hearing.

Camden investigators say witnesses inside the Wheels of Soul Motorcycle Club have identified Lindsey as being the alleged shooter who fired multiple shots that killed both men from Philadelphia.

Less than three hours after the double shooting in Camden, Philadelphia police say three men were stabbed outside the Wheels of Soul motorcycle club at 61st & Market Street in West Philadelphia. A big fight broke out and spilled into the street. The stabbings occurred approximately 4 a.m. that Sunday morning. Police say three men suffered injuries to their bodies.

Once police arrived, the three victims were rushed to local hospitals, where they were treated for their injuries. Police sources say investigators are still trying to find out if the two incidents were related. Police could not say what sparked the fights at both clubs.

The next day over a dozen Camden police cars showed up at the Wheels of Soul motorcycle Club. Authorities launched their investigation as they entered the two-story clubhouse. They talked to several club members in an attempt to find out who pulled the trigger that killed both men from Philly. Through the investigation, detectives spoke to witnesses who were inside the club during the shooting and they had identified Lindsey as being the alleged killer.

According to a court of law, all persons who are charged with crimes are presumed innocent until proven guilty. Even though he knows about this ruling, Wilkes is still happy an arrest was made two weeks ago in Camden County.

“By the authorities catching him is one thing, but it still doesn’t take away the pain,” he said. “For him to take my son’s life and the other person’s life, I think justice will prevail. Right now, I rather for him to get punished by the full extent of the law. Right now, that’s my wish.”