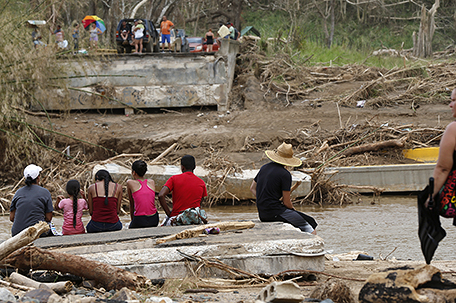 ABOVE PHOTO:  People sit on both sides of a destroyed bridge that crossed over the San Lorenzo de Morovis river, in the aftermath of Hurricane Maria, in Morovis, Puerto Rico, Wednesday, Sept. 27, 2017. A week since the passing of Maria many are still waiting for help from anyone from the federal or Puerto Rican government. But the scope of the devastation is so broad, and the relief effort so concentrated in San Juan, that many people from outside the capital say they have received little to no help. (AP Photo/Gerald Herbert)

During a raucous rally in Alabama last week, President Donald Trump briefly mentioned the devastation in Puerto Rico after the island was whipsawed in September first by Hurricane Irma and then again Hurricane Maria. His tepid response would hardly indicate that the Commonwealth of Puerto Rico is part of the United States, as much as Florida and Texas, which were both hit by storms this hurricane season.

Criticism of the president’s languid response to the island’s distress reached a fever pitch by Monday, prompting him to issue a tweet that compounded the problem.

Indeed, the U.S. and Puerto Rico have a long and complicated relationship, and a new poll shows only a small majority of Americans realize Puerto Ricans are Americans, reports The New York Times.

Here are five things to know about the northeastern Caribbean island:

The island has a population of about 3.4 million, according to 2015 U.S. Census Bureau statistics. Most are mixed race and identify as Black, White, Asian and indigenous.

Puerto is a commonwealth

The designation gives autonomy to the island, which allows it to display its flag. Puerto Rico, however, is governed by the U.S. Congress. Governor Ricardo Rosselló is the highest ranking elected official on the island.

On March 2, 1917, the U.S. approved statutory citizenship to residents of Puerto Rico. People born in Puerto Rico between April 11, 1899 to January 13, 1941, became citizens when Section 3012 of the Immigration and Nationality Act was passed. They have the same rights as people born in the 50 states, notes The Times. Puerto Rico was ceded to the U.S. on December 10, 1898 as part of the Treaty of Paris after the Spanish-American War.

“Puerto Rico, which is part of the United States, can turn into a humanitarian crisis,” Gov. Rosselló said Monday in a plea for federal aid, The Times reports. “To avoid that, recognize that we Puerto Ricans are American citizens. When we speak of a catastrophe, everyone must be treated equally.”

In a strange twist, Puerto Rico has no representation in the Electoral College so residents are not allowed to vote in general presidential elections, according to The Times. Voters, however, do have a say in presidential nominations. In 2016, Marco Rubio won the Republican primary, while Hillary Clinton won the Democratic primary.

The country is in deep debt and poverty runs deep. The median household income in 2015 was  $18,626, according to a Pew Research Center studies.