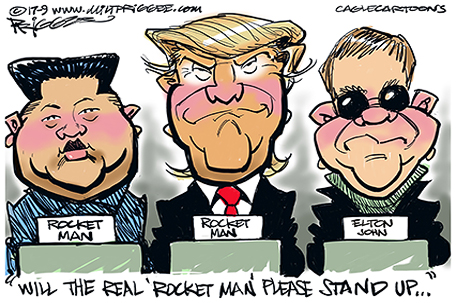 By Jonathan Lemire and Darlene Superville

UNITED NATIONS — President Donald Trump, in a combative debut speech to the U.N. General Assembly, threatened the “total destruction’” of North Korea if the nation’s “Rocket man” leader does not abandon his drive toward nuclear weapons.

Trump, who has ramped up his rhetoric throughout the escalating crisis with North Korea, told the murmuring crowd of world leaders on Tuesday that “it is far past time for the nations of the world to confront” Kim Jong Un and said that Kim’s “reckless pursuit of nuclear weapons” poses a threat to “the entire world with an unthinkable loss of human life.”

“Rocket man is on a suicide mission for himself and his regime,” said Trump, using a belittling nickname for the North Korean leader. He said of the U.S.: “If it is forced to defend itself or its allies, we will have no choice but to totally destroy North Korea.”

In dark language reminiscent of his “American carnage” inaugural address, Trump touched upon hot spots around the globe, declaring, “The scourge of our planet is a group of rogue regimes.” Elected on the nationalist slogan “America First,” Trump argued that individual nations should act in their own self-interest, yet rally together when faced with a common threat.

He urged nations to join to stop Iran’s nuclear program – he declared the deal to restrain it an “embarrassment” for the United States – and defeat “loser terrorists” who have struck violence across the globe. He denounced “radical Islamic terrorism,” the inflammatory label he has recently shied away from. He denounced the Syrian government and warned that some violence-plagued portions of the world “are going to hell.” He made little mention of Russia.

North Korea drew most of Trump’s attention and anger.

His lashing was a vigorous restatement of what’s been said by U.S. leaders before, but was likely to hit home harder for being intensely delivered in diplomatic prime time at the U.N. General Assembly. After a litany of accusations – the starvation of millions, the abduction of a Japanese girl – he questioned the legitimacy of the communist government by referring to it as a “band of criminals.”

Though he used bellicose rhetoric rare for a U.S. president at the rostrum of the United Nations, the speech was textbook Trump, a stark depiction of good-vs-evil and a broadside against America’s foes.

Trump, who has previously warned of “fire and fury” if Pyongyang does not back down, claimed that “no one has shown more contempt for other nations and for the well-being of their own people than the depraved regime in North Korea.” And he scolded nations that it was “an outrage” to enable and trade with North Korea, seeming to slight China, though he did not mention it by name.

Trump, however, stopped short of calling for regime change, which North Korea regards as the ultimate American intention and treats as a reason for its development of nuclear weapons. That may offer some reassurance to China and Russia, which have urged the U.S. to tone down its rhetoric and restart dialogue with North Korea.

Addressing the General Assembly is a milestone moment for any president, but one particularly significant for Trump, a relative newcomer to foreign policy who has at times rattled the international community with his unpredictability. He has pulled the United States out of multinational agreements, considered shrinking the U.S. military footprint in the world and deployed bombastic language on North Korea that has been criticized by other world leaders.

Trump frequently belittled the U.N. as a candidate and some within his White House believe the U.N acts as a global bureaucracy that infringes on the sovereignty of individual countries. He urged the world leaders to embrace their own “national sovereignty to do more to ensure the prosperity and security of their own countries.

But the president stood before world leaders and a global audience and declared that U.N. members, acting as a collection of self-interested nations, should unite to confront global dangers.

“I will always put America first. Just like you, the leaders of your countries, should and always put your countries first,” said Trump, who assured the U.N. that the United States would not abdicate its leadership position in the world but needed other countries to contribute more.

“We can no longer be taken advantage of or enter into a one-sided deal in which the United States gets nothing in return,” he said.

World leaders, many of whom were seeing Trump in person for the first time, were certain to take the measure of the man and parse his every word for clues on how he views the U.S. role in the world. His remarks sometimes produced surprised chatter in the crowd. As he lambasted North Korea, the nation’s two front seats for delegation leaders were empty. Two officials sat a row back, one taking notes.

Trump called the U.N.-backed Iran nuclear deal “an embarrassment” to the United States and suggested it was “one of the worst” international pacts ever struck. And he hinted that his administration, which has accused Tehran of aiding terrorism in the Middle East, could soon declare Iran out of compliance with the deal, which could unravel it.

The administration must decide in mid-October whether it will certify that Iran is still in compliance with the agreement.

Trump vowed again to take the fight to terrorists but warned that parts of the world were so plagued by violence and poverty, they were “going to hell.” He also decried the “disastrous rule” of Venezuela’s Nicolas Maduro and urged the U.N. to step in.

“To put it simply, we meet at a time of both immense promise and of great peril,” he said. “It is entirely up to us whether we lift the world to new heights or let it fall into a valley of disrepair.”

The speech drew varying reactions from leaders. Israeli Prime Minister Benjamin Netanyahu, a Trump ally, wrote on Twitter, “In over 30 years in my experience with the UN, I never heard a bolder or more courageous speech.” But Swedish Foreign Affairs Minister Margot Wallstrom told the BBC that “It was the wrong speech, at the wrong time, to the wrong audience”

Outside of an oblique reference to a threat to Ukraine’s sovereignty, Trump made no mention of Russia or its president Vladimir Putin. He again chastised the U.N. for what he said was its bloated budget and bureaucracy but did not threaten Washington’s commitment to the world body. He pledged the United States would be “partners in your work” to make the organization a more effective force for world peace.

The administration has shied away from talk of nation-building or creating democracies through the use of the U.S. military.

“We do not expect diverse countries to share the same cultures, traditions or same systems of government,” Trump said at the U.N. He added that he does expect all nations to “respect the interest of their own people and the rights of every other sovereign nation.”