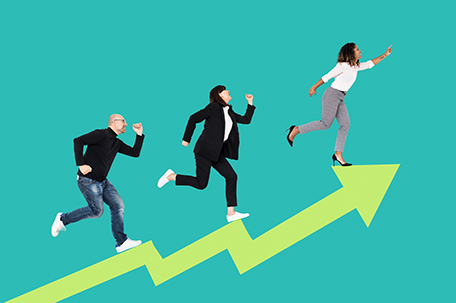 WASHINGTON–U.S. job growth declined modestly in November, a move that could signal a slower but still steady pace of hiring and growth next year.

The potential for a more anemic economy contributed to a sharp drop in the stock market Friday, December 7, sending the Dow Jones average down 560 points, or 2.2 percent, by market close.

Yet most economists said last month’s job gain of 155,000 is more sustainable than some of the larger increases posted earlier this year. And hiring at last month’s pace would make it easier for the Federal Reserve to slow its interest rate increases, which investors worry are weighing on the economy.

The unemployment rate stayed at 3.7 percent, a nearly five-decade low, for the third straight month, the Labor Department said Friday in its monthly jobs report.

Still, the panicky financial markets illustrate how the views of Wall Street and most of the rest of the U.S. can differ.

For most Americans, jobs and incomes are the most important economic measures. Average hourly earnings increased 3.1% in November from a year earlier, Friday’s report said, only the second time they have climbed that much since the recession ended nine years ago.

“We’re still a little surprised to see such a growing panic in markets develop quite so soon given the relatively benign economic backdrop,’’ Paul Ashworh, an economist at Capital Economics, said in a research note.

Yet for Wall Street, higher pay can crimp corporate profit margins. Many large, publicly-traded companies are hit by slower growth in places such as Europe and Japan. They are also more directly affected by tariffs that the Trump administration has imposed on a range of imports.

“There is a disconnect between the gloom and doom environment in financial markets and real economic conditions,’’ said Gad Levanon, chief economist at the Conference Board, a research group.

Most analysts do expect economic growth to decelerate next year. The boost from the Trump administration’s tax cuts, implemented late last year, is expected to fade. The Fed’s rate hikes could send borrowing costs higher. And the Trump administration has imposed tariffs on almost half of all imports from China, which will remain in place during a 90-day window for negotiations announced last weekend.

Those concerns have roiled financial markets, sending major stock indexes down more than 4 percent this week. That’s the worst weekly decline since March.

Growth is forecast to slow to a still-solid 2 percent to 2.5  percent, analysts say, down from roughly 3% this year. Hiring will likely decline to about 150,000 a month from just above 200,000 this year, through November.

“The economy continues to churn out new jobs and reflects the strong underlying business conditions that point to steady, albeit slower job growth and economic activity in 2019,’’ said Joe Brusuelas, chief economist at consulting firm RSM.

Fed policymakers are still likely to raise short-term interest rates at its meeting later this month, Brusuelas said. But Friday’s report suggests the Fed may not hike rates next year as rapidly as many investors have feared.

The ongoing job gains are pushing down unemployment rates to historically low levels for a variety of groups. The unemployment rate for men aged 20 and above fell last month to 3.3 percent, the lowest in 18 years. And the rate for Americans with just high school diplomas dropped to 3.5 percent, the lowest since December 2000. The African-American jobless rate declined to 5.9 percent, matching May’s figure as the lowest on record.

That’s making it more challenging for businesses to find the workers they need. Employers have posted 7 million open jobs, outnumbering the ranks of the unemployed, which fell last month to just under 6 million.

Michael Mabry, chief operating officer at Mooyah, a fast-causal burger chain mostly located in the South, says his company has had to raise pay and offer more flexible scheduling to attract new workers. The company plans to open 15 locations next year, which could create up to 450 new jobs.

Applications have fallen “to an all-time low,’’ Mabry said.

“We’ve had to get competitive on work-life balance,’’ Mabry said.

Nearly all employees make at least $10 an hour, and management salaries have risen 5 to 10 percent in the past year, he added.

Nationwide, hiring in November was led by health care firms, which added 40,100 jobs, and manufacturing companies, which hired 27,000 new workers, the most in seven months and a sign that trade tensions have yet to weaken factory hiring.á

Strong holiday shopping helped lift retailer hiring by 18,200 in November, the most in six months. Online spending likely boosted shipping and warehousing jobs, which grew 25,400, the largest in 14 months.