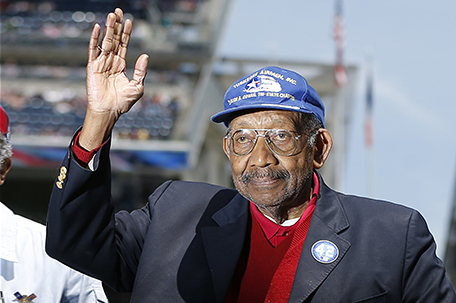 ABOVE PHOTO:  Tuskegee Airman Dabney Montgomery waves to the crowd as he is introduced before the start of a baseball game between the New York Yankees and the Baltimore Orioles in New York in 1993. Montgomery, who served with the Tuskegee Airmen in World War II and marched with the Martin Luther King Jr., has died. He was 93.   (AP Photo/Kathy Willens, FIle)

Dabney Montgomery fought for America on two battlegrounds: in southern Italy, during World War II, and in the American South, during the civil rights movement.

Montgomery, who died last Saturday at the age of 93, was a ground crewman with the Tuskegee Airmen. He went on to be a bodyguard for Martin Luther King Jr., guarding the civil rights leader during the march from Selma, Ala. — his hometown.

Montgomery, along with the other Tuskegee Airmen, received the Congressional Gold Medal in 2007.

The heels from the shoes he wore during the march from Selma to Montgomery will be on display in the new National Museum of African American History and Culture in Washington, which is opening later this month.

Dabney Montgomery grew up in Selma; his father was a fireman (a stoker) for Southern Railroad.

“Watching my father board his train, I wanted to be an engineer when I grew up,” he told the Wall Street Journal last year. “But only white men were engineers then, and only a few Blacks became firemen.”

As a young man, Montgomery was drafted, trained as a ground support crew and was sent with the Tuskegee Airmen to southern Italy, where he supported the pilots.

“When I saw guys who looked like me flying airplanes, I was filled with hope that segregation would soon end,” he told the Journal.

But when he returned home at the end of the war, discrimination was rampant.

After he was discharged from duty in Atlanta, Montgomery went to the train station to head home to Alabama. He described what happened next in an oral history project by the Alliance of Ethics and Art.

“Before I could get in, a white officer threw up his hand. ‘You can’t come in this door, boy, you got to go around the back,’ “ Montgomery remembers. “That was 10 minutes after I received my honorable discharge.”

Things were even worse once he got to Selma, he says. He told the Wall Street Journal that when he tried to register to vote, the woman at the courthouse told him he needed the signatures of three white men.

Montgomery got the signatures. When he brought them in, there was a new requirement: that he own $1,000 worth of property. He didn’t have it, and she wouldn’t let him register.

He went to college on the GI Bill and moved to New York, but the Civil Rights Movement brought him back to the south.

In an interview, Montgomery described the moment he decided to go home:

“I was sitting at home in New York City and I saw that attack on people in Selma on the Edmund Pettus Bridge. They gassed them and beat them with sticks — the sheriff, the officials in their uniforms, because they was marching to the governor’s office to vote.

“And I saw them knocked down, and I saw the gas in the air, and I was sitting here — this is happening in my hometown, Selma! I said, ‘I’m going and get[ting] a taste of that gas.”

“I went to my director and said, ‘I’ve got to go home. … I’m going home to take part in that movement.”

So he did. He joined the protests in Selma and became one of Martin Luther King Jr.’s bodyguards, The Associated Press reports, guarding the leader on the famous 1965 march from Selma.

The AP notes that Montgomery, who later moved back to New York and settled in Harlem, continued to serve his community for his entire life:

“He worked for the New York City Housing Authority and as a volunteer outreach worker for a nonprofit that assists the elderly.

“Montgomery remained active until his final weeks, frequently visiting schools to talk to children about his experiences growing up in Alabama, serving in the war and marching for civil rights.

“ ‘He just loved motivating young people to be somebody,’ [his wife] Amelia Montgomery said. ‘That was his joy.’”