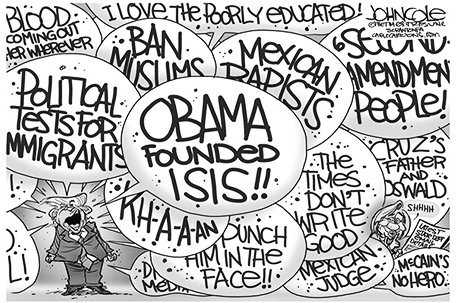 Donald Trump’s decision not to address conventions of several minority organizations was hardly surprising, political analysts and strategists agree. The potential impact of the Republican candidate’s snubs was a matter of contention among the experts, however.

The already stark differences between the campaigns of the GOP’s presidential nominee and that of Democratic nominee Hillary Clinton were made even more glaring when Trump failed to address the NAACP’s convention in July and more recently the National Urban League’s held Aug. 3-6 in Baltimore, as well as the joint convention of the National Association of Black Journalists and the National Association of Hispanic Journalists held in Washington, D.C., Aug. 3-7.

“Given Donald Trump’s rhetoric and issues relating to race and ethnicity, it is not surprising he as an individual candidate would decide not to show up,” said Andra Gillespie, a political analyst at Emory University. “Considering Trump is running a really divisive campaign, and considering the ways Trump has marginalized journalists that have been critical of him, the campaign might have considered the optics of having Trump engage in debate back and forth with people there.

“The Trump campaign realistically knows he will not get a lot of African American voters,” she added, “so they may have decided it is not worth wasting time and money to go before an African American audience.”

The move flies in the face of recent trends set by GOP presidential candidates. In 2008 and 2012, Sen. John McCain and Mitt Romney, the GOP’s nominees in those years, respectively, addressed the NAACP’s annual convention, facing what may have been perceived as a hostile audience to reach out to minority voters.

“I’m glad Donald Trump didn’t go to any of these group’s conventions,” said Raynard Jackson, a Black Republican political strategist who called the conventions the “season of buffoonery.

“I have been advising Republican leadership and candidates not to show up at these events,” Jackson continued. “These groups are all aligned with the Democratic Party. Why should a Republican leader go to any of these conventions when they don’t even have a Black Republican on their panels or even as a keynote speaker? What I recommended to the Party is that, as opposed to going to these conventions, candidates can go to our own events organized by Black Republicans. We can create our own optics.”

Christian conservative Carol M. Swain, a professor of politics and law at Vanderbilt University, agreed. “He obviously made a political calculation that it [his absence at these conventions] would not have an impact on his campaign,” Swain told the AFRO. “A lot of politicians would pander to Blacks by going to these events. But it may be that he sees these groups as not representing the Black rank-and-file. These groups are focused on issues such as LGBT rights and climate change while the Black rank-and-file are more concerned with survival.”

Gillespie, however, disagreed, saying Trump’s absences may be interpreted as cultural insensitivity and disdain among voting blocs that he has already alienated. For example, a July poll conducted by Quinnipiac University found only 1 percent of African-American voters are supporting the Republican candidate—a new low. Romney, in contrast, received 5 percent of the Black vote in 2012.

“Someone who was really making a serious attempt to reach out to Black and Hispanic communities would not decline invitations to conventions hosted by Black and Hispanic organizations,” the political analyst said. “A voter sitting in her living room may interpret this as ‘African-American issues are not important to this candidate’ and may vote accordingly.”

NAACP President and CEO Cornell William Brooks said practically the same thing in July. He said the organization’s conference would have been an ideal opportunity for Trump to address issues such as the poor relations between law enforcement and the Black community.

Perhaps more importantly, Trump’s absences have even broader ramifications beyond his bid for the presidency, Gillespie added.

“The problem with this are the implications for the Republican Party going forward,” she said. “They were making concerted efforts to reach out to minority voters and Donald Trump has just completely undermined all of those efforts; he set that project back years with his campaign.”

Swain said that Trump’s supporters said they still believe he can make inroads with minority voters, however: “I expect him to make some outreach to Black voters but it probably would not be in a forum such as the NAACP or Urban League convention.”