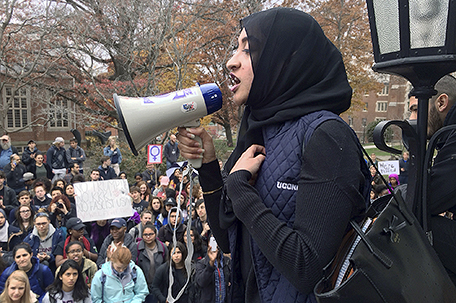 ABOVE PHOTO:  Eeman Abbasi speaks during a protest on the University of Connecticut campus against the election of Republican Donald Trump as president Wednesday, Nov. 9, 2016, in Storrs, Conn. Abbasi, a junior psychology and neurobiology major, said as a Muslim student she feels that the American people told her Tuesday night that even though she was born in this country she doesn’t belong here.   (AP Photo/Pat Eaton-Robb)

By Rachel Zoll and Deepti Hajela

On the morning after the election, Alia Ali had a sickening feeling as she headed to her job as a secretary at a New York City public school, her hijab in place as usual. Ali is a Muslim who lives and works in one of the most diverse places in the U.S., and yet the ascension of Donald Trump to the White House left her wondering how other Americans really viewed her.

“Half of America voted one way and half of America voted the other, and you’re like, ‘Which half am I looking at?’” she said. “You become almost like strangers to the people you’ve worked with. Is this person racist? Do they like me? Do they not like me? Because that’s what this election has done.”

American Muslims are reeling following the election of Trump, whose campaign was rife with anti-Muslim rhetoric and proposals that included banning Muslims from entering the country and heightened surveillance of mosques across the nation. Now, among many of the 3.3 million Muslims living in the U.S., there is significant fear, along with some reports of harassment; one hijab-wearing student at San Diego State University said she was briefly choked by suspects who made remarks about Trump’s victory.

“There are lots and lots of people who aren’t going out of the house,” said Eboo Patel, a Muslim who heads the Interfaith Youth Core, a Chicago-based organization that works with colleges and government officials to build interreligious relationships.

At New York University late last week, hundreds of people sat shoulder-to-shoulder on a grand staircase of a student center to express solidarity after the word “Trump!” was scrawled on the door of a Muslim prayer space at the school. Students spoke of friends who wore headscarves or other traditional clothing and were afraid to take public transportation home for fear of being harassed.

Sana Mayat, a 21-year-old senior who wears the hijab, said the election made her realize “there was a large part of this country that didn’t want me here.”

“There is an intense state of anxiety about the future,” said Rami Nashashibi, a parent of three and executive director of Chicago’s Inner-City Muslim Action Network, which has been inundated with calls seeking support since Election Day. “I grappled with the conversation I had to have with my children.”

The outcome was especially bitter following an unprecedented voter registration drive by American Muslims, including get-out-the-vote sermons at mosques and the creation of a political action committee, Emerge USA, to mobilize Arabs and Muslims.

Enas Almadhwahi, a 28-year-old Yemeni immigrant who has been in the U.S. since 2008, became a citizen this year and voted for the first time. To mark the occasion, she brought her 7-year-old daughter, along with some co-workers.

“At that moment, I was so happy,” said Almadhwahi, who lives in Brooklyn, New York, and works at an Arab-American community organization. The next day, when she told her daughter Trump had won, the girl cried. A friend had told the little girl that if Trump won, it would mean they couldn’t talk anymore.

“Everything feels like it’s upside down,” Almadhwahi said. “I still like to hope Trump will change his words about Muslims.”

Trump’s policy plans remain a mystery, but his administration could radically reshape the Justice Department, which has been an ally under President Barack Obama in protecting Muslim civil rights. Trump could also repeal a key Obama program that prevents the deportation of some immigrants, including Muslims, living in the country illegally.

Muslims had far from a perfect relationship with the Obama administration. For years, the president kept the community largely at arms-length, sending surrogates to meet with them amid a stubborn misapprehension, fueled in part by his critics, that Obama, a Christian, was secretly Muslim. Many U.S. Muslim leaders were uncomfortable with his foreign policy in Iraq and elsewhere, and objected to his program to fight extremism at home, saying the focus on Muslims ignored other threats from right-wing, anti-government extremists.

Still, Muslim leaders had built solid ties with many government officials. Now, they face not only the loss of those connections, but potentially a closed door to their concerns.

“The friends we have are going to be fewer,” said Farhana Khera, president of the California-based civil rights group Muslim Advocates, which has represented clients suing over the New York Police Department’s surveillance of American Muslims. “I think we’ll be very much in a defensive posture.”

Since the election, mosques and Muslim groups have organized community meetings and conference calls focused on how to move forward. The Indiana-based Islamic Society of North America, the largest communal Muslim group in the U.S., issued a statement inviting Trump to engage with the community, saying “many American Muslims are traumatized by the result of the election and the fear of what is to come.” The group said there was no immediate response from Trump’s office.

Sheik Omar Suleiman, resident scholar at the Valley Ranch Islamic Center in Irving, Texas, and the Council on American-Islamic Relations, an anti-defamation group, distributed suggested sermons for juma, or Friday prayers at mosques, stressing Quranic verses about remaining strong in the face of hardships.

“Have hope in the people because Allah may turn their hearts toward you,” was among the verses they cited.

Faisal R. Khan, founder of a youth advocacy and peace organization near Chapel Hill, North Carolina, attended four Trump campaign rallies over the last year, in part to protest but also to speak with the Republican’s supporters. Khan lived years ago in the Midwest, where he knew people who had grown resentful over losing Rust Belt jobs, and said he understands what drew so many working-class whites to the president-elect.

Khan has created a Facebook page called “Talk To Me America,” hoping to start a conversation that can combat anti-Muslim bias.

“Peaceful protest is good, but at a certain point, we have to sit down and talk,” he said. “At the end of the day, we’re all human beings. We’re all Americans.”