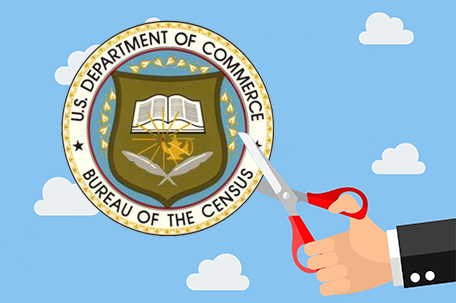 The census count impacts political representation and the distribution of a range of public services. Marginalized communities face the greatest harm from an inaccurate count.

The Trump administration and GOP lawmakers are clearly making efforts to undermine the accuracy of the upcoming 2020 decennial census, says Robert Shapiro, writing for The Brookings Institutions.

Shapiro, a senior policy fellow at Georgetown University’s McDonough School of Business, warns that the bureau’s census count “matters more than you think.” He should know. Shapiro supervised the Census Bureau in the leadup to the 2000 count.

The U.S. Constitution requires a population count every 10 years. According to the bureau’s website, the federal government has conducted a decennial census in years ending in “0” since 1790.

Shapiro pointed out that the count determines the allocation of the House of Representatives’ 435 seats, as well as state and local legislatures in many jurisdictions.

Having an accurate census also determines how the federal government distributes funding to state and local governments for a range of public services, including education, various state health care programs (including Medicaid), and housing — to name just a few.

At the same time, state and local lawmakers also depend on the bureau’s data for their programs and effectiveness assessments of those programs.

“Without an accurate census, many states and cities will be denied the full funding they deserve and need, and the federal government will have to fly blind for a decade across a range of important areas,” Shapiro stated.

These data are also used outside government. Shapiro underscored that companies, from retailers to real estate developers and banks, use the demographic information for planning and investment, as well as to locate customers.

At this point in the 10-year cycle, Congress should begin seriously funding the bureau’s work. Shapiro said it’s expensive to count the nation’s more than 300 million residents accurately. That requires not just technology purchases but also includes many other needs, such as leasing local offices and training workers.

The Economist reported that legislation is pending in Congress that would appropriate just $1.5 billion for 2018–about $300 million short of the bureau’s needs. It’s in such peril that the Government Accountability Office added the 2020 census to its high-risk projects, the magazine noted.

In 2014, the Republican-led Congress disregarded the Obama administration’s budget requests and declared that the 2020 census “should cost no more than the 2010 count without adjusting for inflation, or some $12.5 billion,” Shapiro wrote.

The bureau has had to cut corners, by taking steps such as ending a planned Spanish-language test census and terminating tests of outreach strategies aimed at encouraging marginalized communities to fill out census forms.

Since coming into office, President Donald Trump has taken steps to hinder the bureau’s work. Shapiro said the Trump administration cut his predecessor’s 2017 budget request for the Census Bureau by 10 percent, where Trump proposes to keep it for 2018.

Shapiro also pointed to a leaked early draft of an executive order circulating in the administration that would direct the bureau to inquire about citizenship status. The unprecedented directive, he said, is unlawful.

Former census directors Vincent Barabba and Kenneth Prewitt urged Trump “to act quickly” in a Washington Post opinion piece. They highlight that the administration has not identified a replacement for the former bureau director, John Thompson, who stepped down in June in apparent frustration with politicians making his job difficult.

“The immediate task is to nominate someone who can provide stability through the final years of the decade, explain the importance of the agency’s mission compellingly, address Congress’s fiscal concerns and be ready for full immersion in the important tasks at hand,” they wrote.

What’s equally critical, Barabba and Prewitt noted, is to increase funding for 2018 and “ramping up further in 2019.”