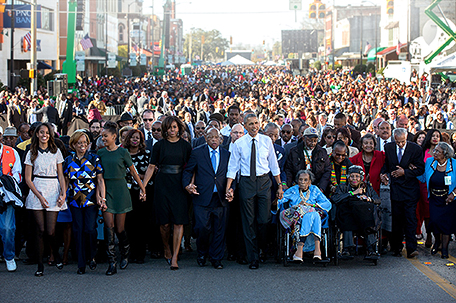 ABOVE PHOTO:  President Barack Obama and the first family joined thousands of marchers in commemoration of the 50th anniversary of ‘Bloody Sunday’, March 7, 1965. Obstructions to voting rights remain key issues as America prepares for the 2016 presidential elections.  (Photo: White House)

Last year’s top stories in the Black Press appear to predict continued protests, advocacy and legislation in 2016 on the same key issues that have long plagued Black America.

Racism and White supremacy, police misconduct, economic inequality, gun violence, criminal justice inequities, and voting rights challenges were among the top Black press issues in 2015 and – with presidential elections and continued protests, will continue into 2016 and likely beyond.

The following are the synopses:

Racial Terrorism: Dylan Roof – On June 17, the unthinkable happened. A 21-year-old White man shot and killed nine people who had conducted prayer and Bible study with him at Charleston, S.C.’s historic “Mother” Emmanuel A.M.E. Church. Sadness and horror swept the nation, intensified by the fact that Roof said he had come to the church “to kill Black people.” President Obama delivered the eulogy of the pastor, the Rev. Dr. Clementa Pinckney, also a member of the South Carolina state legislature.

Battles against Confederate flag, emblems, and monuments: Following the mass shooting at “Mother Emanuel”, South Carolina Gov. Nikki Haley led the removal of the Confederate flag from atop the S. C. statehouse July 10. The act of hate by Roof, who waved the flag as a symbol of racial hate, was the impetus to do what had been fought over for decades. Roof now faces hate crime charges. 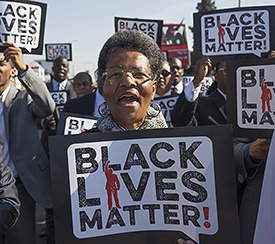 Black Lives Matter movement: The largely youth-led protests demanding the end to unjust police killings of unarmed African-Americans raged throughout 2015 and has continued into the New Year. The death of Baltimore’s Freddie Gray, culminated in fiery rebellions in April. Six police officers have been charged in his death. In Chicago, protests continued through Christmas in the video-taped death of 17-year-old Laquan McDonald, shot 16 times as he clearly walked away from police holding a small knife. Once the video was released a year later, Officer Jason Van Dyke was arrested and charged with murder in his death. Now the Dec. 26 death of 55-year-old mother and Grandmother Bettie Jones has sparked outrage across the country. Police claim they were shooting at Quintonio LeGrier as he hurled a metal baseball bat. Questions surround why Jones, a neighbor was shot and whether police needed to shoot to kill LeGrier.

20th anniversary Million Man March: The call by Nation of Islam Minister Louis Farrakhan to commemorate the 1995 march on the Washington Mall yielded what appeared to be another million Oct. 10. Though Farrakhan’s speech hit on a number of themes, the focal issue at the gathering was economic justice.

Economic Justice/Unemployment: The adult Black jobless rate dipped below double digits on occasions, but remain twice that of White unemployment and consistently above the average unemployment rate. Likewise, economic justice in general remained on crisis level. According to Forbes Magazine, the typical White family has 16 times the wealth as a Black family.

50th Anniversary of Voting Rights March across Edmund Pettus Bridge: Thousands traveled to Selma, Alabama to commemorate the 50th Anniversary of “Bloody Sunday”, the March 7, 1965 march during which Alabama State police officers attacked and beat marchers, including Congressman John Lewis (D-Ga.). As the Nov. 8, 2016 presidential elections rev up, activists say obstructions to and attacks on voting rights remain among their chief concerns.

Rise of Donald Trump on platform of bigotry: Billionaire businessman Donald Trump has risen to the top of the GOP ticket with Iowa primaries less than a month away. Trump has drawn a large following of people who are apparently attracted to his exclusionary rhetoric, which began with his implying that Mexican immigrants are rapists and murders. His most recent shocker is his call for a band on all Muslims entering the U. S. He also implied that a Black Lives Matter activist “perhaps should have been ruffed up” for interrupting one of his rallies. This statement was made after the activist was attacked and beaten by Trump supporters. 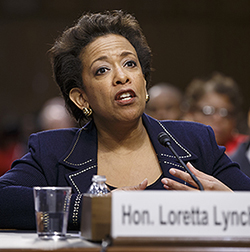 Loretta Lynch becomes first Black woman attorney general: Attorney General Loretta Lynch succeeded the first Black attorney general Eric Holder. After a long fought battle for her Senate confirmation, she was sworn in by Vice President Joseph Biden April 27.  Among her major acts so far, she has been initiated federal investigations into the racial patterns and practices of both Baltimore and Chicago police departments.

Gun Violence: From street crimes to mass shootings thousands were killed by gun violence across the U. S. in 2015. Baltimore, Chicago as a string of cities around the nation hit record numbers of homicides. Citing a Congressional stalemate on the issue, President Obama, Jan. 4, prepared to announce his intention to use executive powers to enforce gun restrictions.

Criminal Justice Reforms: President Obama became the first sitting president to visit a federal prison. From information he gathered about federal prisoners, he announced he would push to “ban the box”, the nickname for the movement to rid federal job applications of the question about past incarcerations. In July, Obama also pardoned 46 non-violent drug offenders. Despite these moves and his calls for a closer look at the so-called “war on drugs”, activists say far too many convicted felons remain without voting rights after serving their time.

In President Obama’s  last year, many in Black America await whether he will make new strides on any of these issues. But with a Congress that is at a partisan stalement, he may continue using executive powers.

Justice Or Else: Min. Louis Farrakhan calls for economic boycott of Black Friday shopping to “Redistribute The Pain”