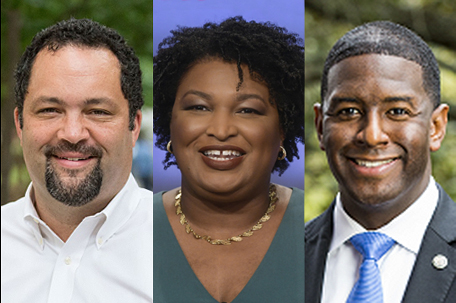 President Donald  Trump has angered and mobilized voters across the nation to the point that many have been challenged to turn out en masse this fall to register and vote for candidates who reject his oft time bitter rhetoric.

For sure, Black Americans have clinched historic roles in the battle to halt and reverse President Trump’s agenda, with a record three African-American candidates running for governor this November in three states — Florida, Georgia and Maryland. Each is trying to return their state’s governorship to Democratic control.

In the process, political analysts said, the three contenders represent a new chapter for the Democratic Party. They reflect the emerging leadership that is younger, more female, broadly diverse and socially progressive, according to analysts. With the exception of Maryland, their Republican opponents are hardline Trump supporters, dissenting from his agenda quietly when they do.

“All of these candidates are pragmatic progressives,” said Emory University political science professor Andra Gillespie, a Richmond area native who earned her degree at the University of Virginia. “They are hoping to present plans to address the economic anxieties of the average working family.”

All three gubernatorial contests present distinct challenges to the contenders, regardless of party, based on the views of political analysts. In Florida, where Tallahassee Mayor Andrew Gillum scored a surprise win in last week’s Democratic Party primary, the challenge is stitching together party leaders who all endorsed him after the primary contest, then raising interest among others. Gillum won only 34 percent of the vote to clinch the party nomination. He has to build from there.

In Georgia, where Spelman College graduate and tax lawyer Stacey Abrams swept the Democratic primary decisively, winning 70 percent of the votes, the challenge is to continue her impressive campaign to register more historically unregistered voters and to get out the vote by knocking on doors house by house.

Not only did Jealous divide the Democratic vote to win the primary, he defeated Rushern Baker, chief executive of heavily Democratic Prince George’s County and one of Maryland’s most respected Democrats with a history in state government.

Gov. Hogan had marginal competition in the Republican primary despite his repeated criticism of President Trump and solid opposition to most of Trump’s agenda. Gov. Hogan, a former Howard County executive, has enjoyed high bipartisan ratings during his four years of working with a Democratic-controlled state legislature.

“They have a governor who is really popular in the state,” said Bowie State University government professor William Lewis. Gov. Hogan has been “very cautious” not to disrupt the civil, bipartisan relationship between leaders of the two political parties.

All three gubernatorial candidates have plugged into the national network of African-American sororities, fraternities and other civic and social organizations to raise money for campaigns that could land them in the history books of their states. Former Virginia Gov. L. Douglas Wilder, who in November 1989 became the first elected African-American governor in the nation, could not be reached to discuss the three new candidates.

The record of service and his high profile in the state’s capital city made him easier to accept as the state’s leader, they said. Before his bid for governor, he had proven leadership skills and was a fiscal conservative, much like his Republican predecessors, analysts said. Also, the political climate in Virginia was more tolerant then than it is today, they said, attributing the souring climate to President Trump.

“The younger generation of Blacks are beginning to percolate,” said historian Alvin Thornell, a veteran political scientist who spent decades at Howard University. “The older Whites have become inactive as illustrated in the recent political contests in New York and Massachusetts. They just were aging and dropping out.”

The Democratic effort this election season will hinge on “New Deal” Democrats returning to the ranks as they did in the 1960, and the candidates’ and party’s success in recruiting and getting new voters to the polls, Thornell and other analysts said.

They estimated nearly one-third of traditional Democrats have become conservative Republicans or dropped from political participation. This loss must be made up with new registration and participation efforts, like that launched in Georgia by  Abrams. “All of these candidates see Whites as part of their coalition,” Gillespie said, noting that Democrats need to build from the ancestors of traditional Democrats, continue courting Latino voters and register and get to the polls people who have not voted in the past.

For Republicans, the formula is to keep the Trump wire sparked, they said. For sure, analysts said, Republicans are loading up for a political rhetoric battle.

Picking the next governor