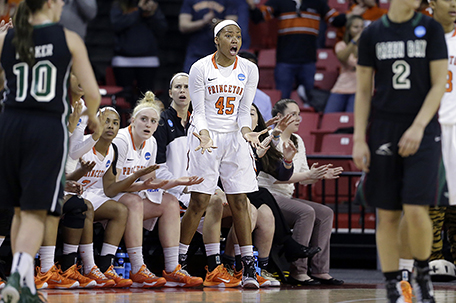 ABOVE PHOTO:  Princeton forward Leslie Robinson (45) reacts to an official’s call in the first half of an NCAA college basketball game against Green Bay in the first round of the NCAA tournament, Saturday, March 21, 2015, in College Park, Md. Robinson is the niece of President Barack Obama, who was in attendance at the game.  (AP Photo/Patrick Semansky)

“On March 23, 2015 at approximately 3pm UMPD received a call stating that the caller had received a text from a third party indicating that a male that she knew had a gun and mentioned president Obama’s niece.

UMPD officers began an immediate investigation into this call and notified the United States Secret Service. As a precautionary measure, security at tonight’s Maryland vs. Princeton game was increased. Our investigation reveals at this time that these details that were passed on from this third party are unsubstantiated.”

On Saturday, President Obama attended Princeton’s 80-70 victory over Wisconsin-Green Bay in the first round, inevitably drawing attention to his niece, freshman forward Leslie Robinson. Her father, Craig Robinson, is the brother of first lady Michelle Obama.

The threat was first reported by USA Today.

After Monday’s game, Princeton coach Courtney Banghart confirmed that she was aware of the threat before tipoff but Leslie Robinson was not. The player did not appear in either of Princeton’s NCAA Tournament games.

“It’s incredibly disappointing that the first question we get (after) being 31-1 (and) in the NCAA Tournament is about a freak,” Banghart said.

“College Park police, I’m sure, had that under control. Leslie is safe. She’s in my locker room. No one loves her like I do. She’s an important part of our team,” Banghart added. “Keep the freaks out of our gym.”

Neither the president nor the first lady attended Monday’s game, although Supreme Court Justices Sonia Sotomayor and Elena Kagan sat near Princeton’s bench.

Airline pilots may get better security than President Obama