The power of reconnection 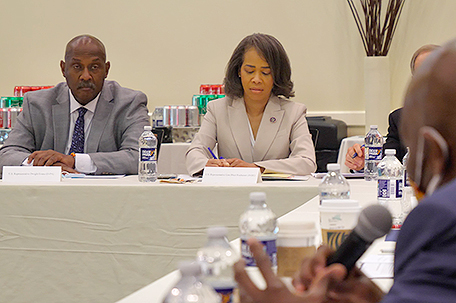 On Monday, Congressman Dwight Evans and Congresswoman Lisa Blunt Rochester connected with activists in Wilmington, Delaware and Philadelphia to discuss legislation to right a wrong.

It’s a dark, foreboding looking place even in the daytime. While there is a vendor there that will sell you anything from clothing to box fans during the day, there’s also trash and several homeless encampments, said Majeedah Rashid, CEO of the Nicetown Community Development Corporation.

“We try to address the issues with the homeless,” she said. “But there’s also short dumping and vandalism. It’s a really unsafe looking area.”

Nicetown CDC is attempting to create a sport park that would make that area a little less foreboding. It would include lights, as well as a place for children to play, a vending area, and other amenities.

It’s the kind of project that Rashid hopes can get funding if the Reconnecting Communities Act becomes law.

“It wouldn’t be just a destination for the community,” she said. “It would also attract visitors, provide economic stimulation, and help repair the wound to the community. We hope that [the act] would provide resources that would then attract and allow us to leverage other resources.”

Rashid was one of the community activists that talked with bill co-sponsors Philadelphia Congressman Dwight Evans and Delaware Congresswoman Lisa Blunt Rochester, about the Reconnecting Communities Act. The $3 billion act, which has already been passed by the House of Representatives, would fund projects like the Nicetown sport park, projects that would reconnect and revitalize neighborhoods divided by interstate highways.

On Monday, the two legislators did a whistle-stop tour that began with a meeting of local officials and activists from Wilmington at the Chase Center on the Waterfront and ended with a gathering at the Crane Community Center on Vine Street in Philadelphia.

The hope is that the bill becomes a part of the Invest In America Act, a package of infrastructure bills being put together by the Biden administration in Washington, Blunt Rochester said.

Like it was for many of the people in attendance, the issue of highways and their impact on neighborhoods is a personal one, she said.

“I look forward to working with my colleagues in Congress to ensure that whatever infrastructure package we pass includes this critical piece of legislation,” Blunt Rochester said. “My family moved to the City of Wilmington in 1969, just a few short years after the completion of I-95. The impact of the interstate cutting through the heart of the city was evident back then and so many of the problems created or exacerbated by its construction persist to this day.”

“It’s time to put people before pavement and communities before cars,” Evans said. “This federal funding could help with things like removing or capping highways, or making other improvements in Philadelphia neighborhoods like Nicetown, Chinatown and the Delaware River waterfront area that have taken the biggest hit from highways.”

The people involved in the roundtables told the Evans and Blunt Rochester stories about homes, businesses, churches and entire communities that were sacrificed on the altar of interstate travel.

But as it has become with most legislation in Washington, how this bill fares in the Senate will determine whether or not it ever becomes law.

Blunt Rochester thinks it has a chance.

“I’m cautiously optimistic,” she said. “It has bipartisan support.”