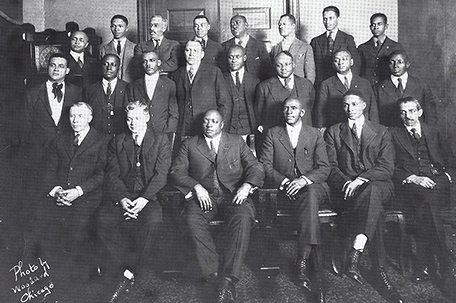 ABOVE PHOTO: Ira Lewis, editor and later president of the Pittsburgh Courier, back row, far left, at the Negro National League annual meeting held in Chicago on January 28, 1922. (Photo/Wikimedia)

PITTSBURGH — As a teenager, Robert Lee Vann plowed fields with an ox under the scorching North Carolina sun. But he didn’t plant seeds of justice until he came north for an education.

After earning bachelor’s and law degrees at the University of Pittsburgh, the young attorney began writing in 1910 for a weekly newspaper called The Pittsburgh Courier. His goal, he wrote, was to “abolish every vestige of Jim Crowism in Pittsburgh.”

For more than 40 years, the Courier’s crusades laid the groundwork for the civil rights movement and for a time, it had 350,000 readers in the U.S. and overseas. Its journalists advocated for fairer hiring practices, better housing and health care and the integration of workplaces, including the military and sports.

“The people who worked there liked what they were doing and felt strongly about the mission of the newspaper. They believed in the mission they were on — to do away with Black inequality,” said Patrick S. Washburn, a retired Ohio University professor and author of “The African American Newspaper: Voice of Freedom.”

The newspaper was “one of the best things that ever happened to the Black race,” Ida Grant, the late Courier receptionist, told Ken Love in his 2009 documentary, “Newspaper of Record: The Pittsburgh Courier.”

In barber shops and beauty salons, people passed editions along, learning about prominent leaders in their community worth emulating, politics, society news, crime and the pocketbook issues that affected their daily lives. They read columns by W.E.B. Du Bois, George Schuyler and Frank Bolden, a World War II correspondent.

With photographer Charles “Teenie” Harris, Edna Chappelle McKenzie chronicled the inability of Blacks to enjoy a cup of coffee or a meal in Pittsburgh restaurants. The fashionably dressed Evelyn Cunningham, called “Big East” because she was tall and based in Harlem, covered lynchings and introduced readers to a young minister, Martin Luther King Jr.

By the 1930s, Mr. Washburn said, the two biggest influences on Black Americans were ministers, who might reach 5,000 people each week, and the Black press. In that decade, The Pittsburgh Courier averaged 190,000 readers nationwide.

Dissatisfied with the Republican Party and President Herbert Hoover’s failure to aid Black Americans during the Great Depression, Vann acted in 1932. A lifelong Republican who revered Abraham Lincoln, the publisher and editor wrote a persuasive editorial urging Black voters to turn away from Republicans, vote for Franklin Delano Roosevelt and become New Deal Democrats.

The editorial, “This Year I See Millions of Negroes Turning the Picture of Abraham Lincoln to the Wall,” swayed many Black voters and led them to support Democratic candidates in the 1930s.

In 1935, when the Courier reached the 100,000 circulation mark, employees signed an edition as it rolled off the presses and gave it to Vann. The following year, circulation more than doubled, partly due to the newspaper’s coverage of Italy’s invasion of Ethiopia, Joe Louis’ victories in the boxing ring, and the Berlin Olympics, where a Black track and field star, Jesse Owens, won four gold medals.

In the 1940s and ’50s, the Courier returned to backing Republican presidential candidates, endorsing Wendell Willkie, Thomas Dewey and Dwight Eisenhower. But it balked at supporting Barry Goldwater in 1964 and endorsed Lyndon Johnson.

When Vann died in 1940, his widow, Jessie, took charge, relying on business manager Ira Lewis for financial expertise and newsroom veterans like Bolden and Prattis for guidance.

“Women were just starting to be able to inherit or run their husband’s businesses. There were still states that did not allow women to inherit their husband’s business,” said Pamela E. Walck, an assistant professor in the media department at Duquesne University. She is researching a book tentatively titled “Voices of The Pittsburgh Courier: Mrs. Robert Vann and the Men and Women of ‘America’s Best Weekly.’”

A letter from James Gratz Thompson, a 26-year-old Black cafeteria worker in Kansas, prompted the Courier’s most successful crusade, its “Double Victory” campaign during World War II. While Black soldiers were risking their lives in Europe, Thompson declared war on racism and a lack of opportunity at home.

“Should I sacrifice my life to live half-American?” he wrote. “Would it be too much to demand full citizenship rights in exchange for the sacrificing of my life?”

The Double V campaign caught on nationally, said Earnest L. Perry, associate dean for graduate studies and research at the University of Missouri School of Journalism.

“It helped the Courier supplant the (Chicago) Defender as the leading African American newspaper in the country at that particular time,” he said.

“The Courier had bureaus in cities across the country and a dozen state and city special editions. Its writers were stationed in France and England during the war. They had an international audience,” Ms. Walck said.

“They knew there was a market,” Mr. Perry said. “Big tobacco has been one of the major national advertisers that has traditionally stuck with the Black press.”

The death of Courier business manager Ira Lewis in 1948 was a blow to the newspaper. With the help of loyal staff, Mrs. Vann struggled to keep it afloat during the 1950s. In the early 1960s, she sold a controlling interest in the Courier to S.B. Fuller, a Chicago businessman who made a fortune in cosmetics. His attempt to tone down the paper’s advocacy during the rise of the civil rights movement failed.

“We had so many Black soldiers deployed overseas in World War II. They suddenly realized that the Jim Crow laws that are keeping them down in the U.S. don’t exist in other places,” she said.

As the movement intensified in the 1960s, mainstream newspapers began hiring Black reporters to cover protests, riots and other events.

“Major mainstream newspapers were realizing that they needed writers to cover this. They had to compete with television,” Ms. Walck said.

In 1963, Mrs. Vann was ousted from the Courier’s board of directors. Three years later, John Sengstacke of The Chicago Defender bought the paper and renamed it The New Pittsburgh Courier. Still a weekly, its focus shifted to a local audience.

“The Pittsburgh community thought it was Jessie who had sold to Sengstacke, that she betrayed the Black community. That’s completely off-base,” Ms. Walck said.

In the 1960s, ’70s and ’80s, Black newspapers struggled as mainstream media expanded coverage and advertising revenue continued to decline.

“They didn’t have the capital to be able to turn on a dime — sort of what the legacy media is dealing with right now,” Mr. Perry said.

“The National Newspaper Publishers Association has tried to build a national brand for the Black press both from a print standpoint and a digital standpoint, and they are venturing into cable.”

Few companies or individuals are willing to make a financial commitment to print media, no matter who owns it, Mr. Perry said.

“In order to be able to make money in the media, you have to invest in it. Very few people or organizations not only have the resources but the willingness to invest in it for the long term. The venture capitalists like Alden Global Capital are not going to do that.”