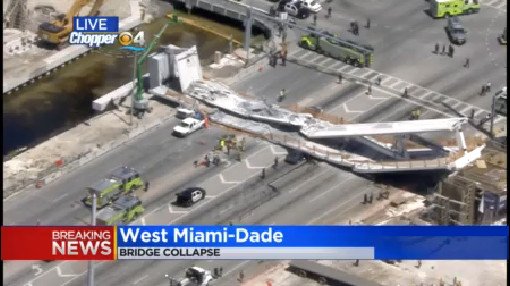 Officials say several people have been killed in the collapse of a new pedestrian bridge at a Florida university campus.

The 950-ton section of bridge was installed Saturday at Florida International University in the Miami area. It hadn’t yet opened to foot traffic.

University officials were urging students and others to stay away from the area where a pedestrian bridge collapsed while rescue efforts proceed.

Firetrucks, police and other emergency vehicles were at the scene Thursday afternoon on the campus of Florida International University in the Miami area. Fire officials said multiple people have been injured.

Gov. Rick Scott tweeted that he was on his way to FIU to be briefed by local law enforcement and university officials.

The university had announced with fanfare Saturday that the main section of the modularly constructed bridge had been swung into place. The university said the “accelerated bridge construction” method was supposed to reduce risks to workers and pedestrians and minimize traffic disruption.