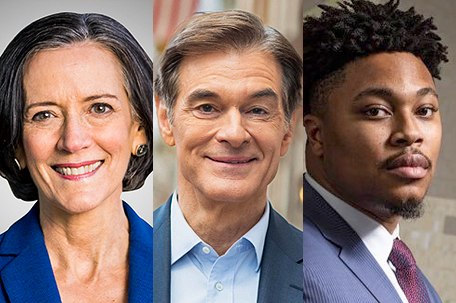 Now that Pennsylvania Sen. Pat Toomey is stepping down, challengers are starting to come out of the woodwork.  Here’s a look at some of the names you’re going to be hearing.

If you went to the Pennsylvania Farm Show earlier this month, and thought you saw a guy who looked like Dr. Oz of “The Dr. Oz Show” fame, your eyes weren’t playing tricks on you.

That’s because Dr. Mehmet Oz, one of the many doctors, decorators, and self-help gurus that media mogul Oprah Winfrey has brought into our lives over the years, is among the cast of characters that is running for the Republican nomination for U.S. Senate here in Pennsylvania.

Now whether he actually gets on and stays on the ballot is going to be determined by whether or not he can prove that he lives here. But Dr. Oz isn’t the only candidate with that problem.

Until recently, David McCormick, the former president of one of the nation’s largest hedge funds, lived in Connecticut. The Bloomsburg native decided to come back home to also run for the Republican nomination for Senate.

Meanwhile, on the Democratic side, Dr. Val Arkoosh, the current chair of the Montgomery County Board of Commissioners, doesn’t have that problem. She does, however, have the obstacle of trying to run as a woman statewide.

Sen. Pat Toomey announced late last year that he wouldn’t be running for a third six-year term in the Senate. And with the Senate currently at a 50-50 split in Washington, D.C., who replaces him in that seat could have a big impact in a lot of ways.

So, here’s a look at some of the people — who aren’t Oz or McCormick — that are vying for it.

Many thought that Lt. Gov. John Fetterman was going to run for the Commonwealth’s highest office. Instead, he decided to make another run for the Democratic nomination for Senate, something he did unsuccessfully in 2016. So far, the polls have him well ahead of the rest of the field, but his decision not to attend a series of candidate forums sponsored by Black clergy here in Philadelphia has put a dent in that armor.

State Rep. Malcolm Kenyatta served as a Pennsylvania surrogate for Joe Biden when he was running for president in 2020. That gave him the opportunity to introduce himself to people who know very few Black people, and even fewer Black, gay people. While a lot of people don’t give him a chance statewide, others say that he might surprise you.

For most of last week, Congressman Conor Lamb has been going around the Philadelphia area trying to get to know a group of people that’s as different from the people in the Pittsburgh area as night and day.

This is a short list. There are more people that will be running and we’ll be spotlighting them in the SUN as the campaign goes on. Signature gatherers will be out on the streets trying to get people on the ballot beginning Feb. 15.