The Honorable Tamika R. Montgomery-Reeves takes the oath of office for Justice of the Delaware Supreme Court 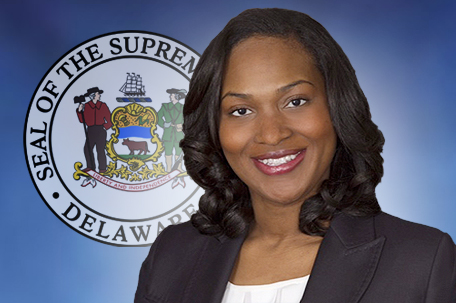 Justice Montgomery-Reeves is the first African American and the youngest to serve in Delaware Supreme Court history.

The Honorable Tamika R. Montgomery-Reeves was publicly sworn in for her first term as a Justice of the Delaware Supreme Court at 2 p.m. on Jan. 3, in the auditorium at Howard High School of Technology in Wilmington.

Chief Justice Seitz administered the Oath of Office as the Justice’s husband Jeffrey A. Reeves, and her sons Jackson and Tyson, held the Bible. The oath was observed by her parents, Bettye Cribbs and Dewery and Caroline Montgomery; and her parents-in-law, LaDell Reeves and Alan and Lisa Reeves. Jeffrey A. Reeves then assisted the Justice in putting on her judicial robe.

Montgomery-Reeves, who is now the first African American to serve on the Delaware Supreme Court, chose Howard High School of Technology for her investiture ceremony because of the historical relevance to civil rights history in Delaware.

Howard High School was founded in 1867 as the first secondary school for Black students in the state. In 1953, the school was at the center of the Belton v. Gebhart case, one of two cases from Delaware that became part of the landmark Brown v. Board of Education decision in 1954 that ended racial segregation in public schools. The school was designated a National Historic Landmark in 2005 and it counts among its alumni feminist writer Alice Dunbar-Nelson, attorney Louis L. Redding, artist Edward L. Loper, Sr. and jazz trumpeter Clifford Brown.