The Cultural Coach: Calling All Allies – This Is Your Moment 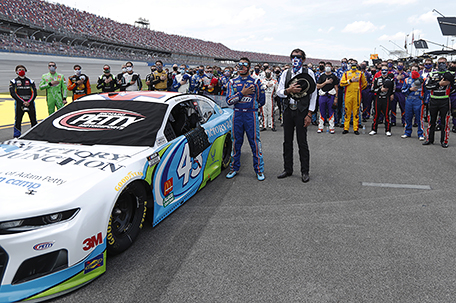 ABOVE PHOTO: Driver Bubba Wallace, front left, and team owner Richard Petty, front right, stand for the National Anthem in the pits of the Talladega Superspeedway prior to the start of the NASCAR Cup Series auto race at the Talladega Superspeedway in Talladega Ala., Monday June 22, 2020. In an extraordinary act of solidarity with NASCAR’s only Black driver, dozens of drivers pushed the car belonging to Bubba Wallace to the front of the field before Monday’s race as FBI agents nearby tried to find out who left a noose in his garage stall over the weekend.  (AP Photo/John Bazemore)

Being a true cultural ally is not like having a sleepover where friends come together, talk, and then return to their separate lives in the morning.

It is more like a steep climb up a rocky hill fraught with danger, some personal risk, and narrow paths that can make anyone feel isolated and lonely.

Without true allies, people of color may never reach that mountaintop. So, listen up.

If you are out there painting half your face black to show outward solidarity with Black Lives Matter, you are not a true ally.

If you post a sign or video of yourself stating that you stand with Black Lives Matter — and do nothing else — you are not a true ally, either.

If you are adding Black Lives Matter dinner specials to your menu or selling trendy T-shirts or face masks — really?

These are actions an opportunist might take, not a friend.

A true ally is the company or individual who, right now, is huddled together to review employment practices and determine if young people of color face hidden, perhaps unintended, barriers in the hiring process.

Allies are ones who are courageous enough to ask themselves the tough questions. Among them: Can a young person of color who is housing insecure fill out an employment application at the company? Can he/she/they get a job if they have no permanent address? (A considerable number of young people are couch surfing and moving frequently from place to place.) Can a young person of color who relies on public transportation reach your company to get to work?

You see, many young African Americans out there protesting believe your company doesn’t value them. They fear — even if they do all the things society has told them to do — they are not going to get a shot at a job paying good salaries and full benefits or offer a meaningful opportunity.

They desperately need you to open doors for them as you march with them, and to use your voice to help amplify their challenges.

In the past week, we have witnessed the power of allies many times. A little girl in Arlington, Virginia wrote anti-racism messages in chalk near her home only to have city maintenance workers show up and wash them away; a city policy prohibits graffiti.

When neighbors heard what happened, they came out and held a chalk party — where everyone wrote anti-racism messages together including one in red, white and blue that read: “Wash it . . . We’ll do it again.” According to the Washington Post, Arlington now is considering a review of its graffiti policy, which requires removal of all unauthorized messages, regardless of content.

Then we had Bubba Wallace, the African American NASCAR driver who has led the movement to remove confederate flags at NASCAR events and promote the sport to diverse audiences.

After a noose was found in his garage stall at Talladega Superspeedway, his fellow drivers stood beside him in a show of support and followed his car onto the track. The message was unmistakable: You won’t divide us. (On Tuesday, the Federal Bureau of Investigation announced no hate crime had been committed. Agents said they determined a pull rope, fashioned like a noose, had been in the stall as early as September.)

Allyship has taken on new importance and a higher level of moral responsibility.

So allies, I thought I might propose a few simple rules:

Before you get out in public to help find solutions, make certain you are not part of the problem. Do a cultural audit to determine if your actions align with your cause.

Make certain you are in it for the long haul before you go public. People in my generation know what it is like to have an opportunity promised and dreams denied. It leads to a generation of walking wounded, which leads to anger, division and even violence down the line.

Amplify the voices of the Bubba Wallaces of the world who seek to make an industry better by making it more appealing and diverse. They are the visionaries who see the clearest path forward.

Allies, this is your moment. People who fight injustice around the world are counting on you. Don’t let us down.

The Cultural Coach: A Nation of Allies– Just what Starbucks’ needs