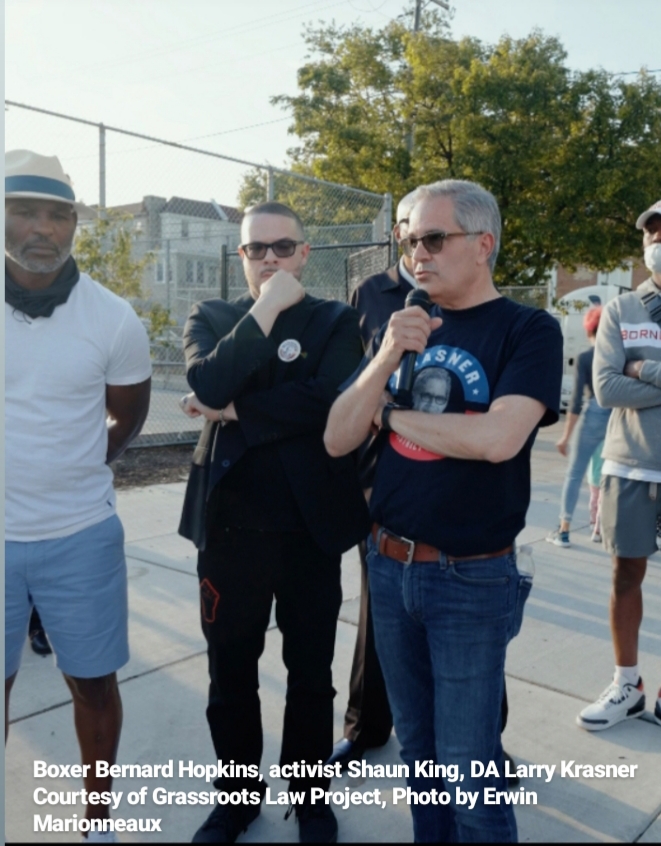 SUN PUBLISHER NOTE: “Journalism is meant to inform the public, even when the person featured is a controversial figure. This story is strictly about King’s career as a journalist, author and activist and his recent visit to Philadelphia to support DA Larry Krasner’s re-election campaign.” ~SUN Publisher Catherine Hicks.

Controversial journalist, author and activist Shaun King is changing our country with his fight for social justice and equality. Love him or hate him, King is one of the most effective and influential human rights activists today.

The Morehouse Man, who is the father of five, and has been married to a fierce Black woman for 25 years, is a force to be reckoned with — online and offline.

“I was organizing people before those platforms were created,” said King, referring to social media platforms such as Twitter and Instagram where he amplifies the voices of the marginalized and unheard. “So I use them [social media platforms] because they allow me to reach a larger audience, nationally and internationally.”

At 41 years young, King is not discouraged by the downside of social media. Despite living in these uncertain times where people knowingly, for their own social media clout, will spread misinformation about him.

Attention is one hell of a drug, as the saying goes. If you want followers, criticizing King is the gold mine. Unfortunately, it is the price King pays for being one of the most visible and impactful leaders today.

“I just understand that doing this work, fame and popularity and notoriety brings with it a lot of drama as well,” King said.

King is a change maker whose work speaks for itself. However, if you are into accolades, here are a few.

He was named one of Time Magazine’s 2018 “25 Most Influential People on the Internet” and honored with BET’s Humanitarian Hero Award. In 2019, he was honored by Rihanna at her 5th Annual Diamond Ball Awards for his activist work along with fellow honoree Mia Mottley, the first woman Prime Minister of Barbados.

King being honored was the result of his high profile presence on social media, calling out racism and exposing police brutality against the African American community with videos he gets access to before most of the main mainstream media. At times showing how police in the same situation with a white defendant react differently.

King knows his craft. As a journalist, he has pinned more than 1,500 articles on various social justice issues. He is also the author of the book “The Power of 100” and in 2020 the release of “Make Change: How to Fight Injustice, Dismantle Systemic Oppression, and Own Our Future” which was on the Bestseller list of the New York Times.

“Shaun King is unapologetic in his commitment to fighting for our people,” said music mogul Sean “Diddy” Combs in a review of King’s “Make Change” book.

“Shaun understands that change does not just happen out of thin air. It’s made,” said US Senator Bernie Sanders giving praise to King on the best selling book.

King puts in that real work. Perhaps that extra drive is due to the criticism he may have already heard before—male privilege.

King has referred to his privilege as a light skinned male in a 2019 BET interview. And, how he has been paid more than fellow women panelists because of it. He shared in that same interview that he informed his agent not to place him on panels where he is unnecessarily paid more than other experts that participate on panels with him.

King is right in many respects on the privilege that comes with having lighter skin and its economic impact. Take a trip down Google lane. Search results will show a plethora of studies of what Black women have already known for centuries to present day—that Black women, especially dark skinned Black women, are paid substantially less across the board in the workplace.

This may be another reason King goes hard in his activism– using his privilege and access to make change in the world, and to compensate for the privilege he has of being a male.

Despite his grueling schedule and notoriety, King was still ground level here in Philadelphia on May 18 for the primary election, campaigning and mobilizing volunteers to re-elect District Attorney Larry Krasner.

“Already today we’ve knocked on over 3,000 doors in areas that aren’t often given the attention they deserve,” King said that day, taking a break at a voter canvas location in Northwest Philadelphia before hitting the streets citywide again.

But, heavy is the head that wears the crown. Dr. Martin Luther King, Jr., Malcolm X, Rev. Al Sharpton to name a few.

King, a Brooklynite who often spends time in Philadelphia, — has to make qualitative and gut wrenching decisions to share graphic videos sent to him of injustices committed against Black people at the hands of police — with the goal of mobilizing to get justice for victims’ families who request his help.

It was the same reasoning that Mamie Till made the courageous decision to allow her 14-year-old son Emmett Till, who was tortured and murdered by White supremacists, to have an open casket funeral despite his disfigured and battered body. In Mamie’s own words, for the world to see “what they did to my baby.”

Jet Magazine, a Black publication, ran the photo, which propelled many to join the Civil Rights Movement, although Till’s killers were eventually acquitted.

Generations later, King also knows the double standard of how Black victims cases are treated. Unfortunately, Black victims’ families often need video to get justice for their loved ones, especially where police reports are in stark contrast to what actually happened — whereas white victims may not need video for their cases to be taken seriously or solved.

Although he began organizing in 1997 during his time as a Morehouse student, King is a product of the Black Lives Matter movement, a movement that was founded in 2013 by three Black women organizers Alicia Garza, Patrisse Cullors and Opal Tometi that has changed the world as we know it and continues to advance and fight for the civil rights of Black people worldwide.

Building upon the momentum of the Black Lives Matter Movement, King’s strength is being able to connect with his audience online and offline. His ability to connect his audience to pressing issues.

King is strategic in his mobilizing.

“I have a plan that goes beyond today,” he said. “If I have a bad day today or a bad week or a bad month, I’m always able to put my eyes back on that plan and say, ‘Alright, let’s get back to work. Let’s endure this hard moment.’ And live to fight another day.”

He also uses that strength to get justice through two organizations.

The Grassroots Law Project that he co-founded with national civil rights attorney Lee Merritt that focuses on policies and non-District Attorney races around the country is one of them. The organization’s most recent accomplishment happened in April of this year when Grassroots Law volunteer Jumeka Reed from Killeen Texas, organized her community against no-knock raids after her brother James Scott Reed was killed.  Killeen City Council voted to ban no-knock raids with the Grassroots Law Project co-authoring the ordinance.

It was through Real Justice PAC that King supported Philadelphia District Attorney Larry Krasner for his 2017 election win and again for the May 2021 primary.

Krasner won the primary election by a landslide against a former prosecutor that Krasner fired from the District Attorney’s office.

So why was national interest needed for a local Philadelphia DA race?

“We have to admit that he [Krasner] had massive opposition from the local Fraternal Order of Police, from a police pac that’s been formed in essence really just to stop him. “And, organizations all over the country. So no matter what, this election was not going to be easy for District Attorney Krasner,” said King during our conversation.

“We’ve partnered with a number of organizations here over the past few weeks, from Working Families Party to Reclaim Philadelphia,” he added.

“We’ve raised nearly $500,000 for his campaign which I think is over half of his budget,” King said.

Through the Real Justice PAC efforts, partnerships and volunteers:

In addition to police brutality, King also discusses another pressing issue that is detrimental to minorities — that prosecutors have more rights than police officers.

“When we talk about qualified immunity for police officers,” King said. “Lawyers prosecutors who work for the government have even more rights than police officers do. It is rare, exceedingly rare, almost unimaginable for prosecutors to be prosecuted for getting a case wrong or wrongfully convicting somebody.”

“In fact, just a few days ago, a prosecutor in Dallas was disbarred for withholding evidence for a homeless man who went to prison for over 10 years for a crime he didn’t commit,” he added.

“Well that assistant district attorney in Dallas was only the fourth prosecutor in the whole history of the country to ever be disbarred for that.”

Although his busy schedule keeps him on the go all the time, King stays focused on his true foundation, which is his family.

“I’ve been married to my wife for 25 years since we were kids,” he said. “I have kids in elementary school, middle school, high school and in college. So, I’m not getting into my own hype. I’m thankful when celebrities support me or support the work that I do. But to me, all of that’s only useful if I’m able to convert that to some type of change to policies, to elections, to support families.”

To learn more about the Real Justice PAC, visit realjusticepac.org.

The Path Forward for Social Justice – An Intergenerational Challenge