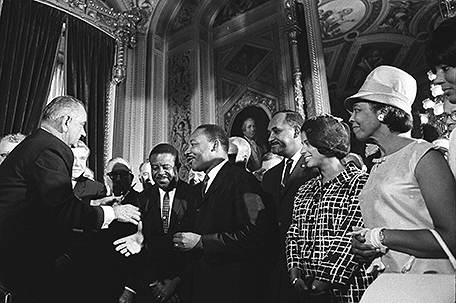 August 6, 2020, Washington, D.C. – Today, we celebrate the 55-year anniversary of the passage of the Voting Rights Act of 1965. But 55 years later, our nation is still struggling to ensure voting rights for all Americans.

This 1965 law was an historic win for African Americans, but we continue to face ongoing voter suppression efforts, from modern-day poll taxes for formerly incarcerated individuals and needless ID requirements, to closed polling locations and ballot shortages in Black communities, to disinformation campaigns on social media and foreign interference in our elections invited by the highest office in our land.

The disastrous 2013 Supreme Court decision in Shelby v. Holder gutted Section 5 of the VRA and our ability to combat voter suppression and intimidation. The decision unleashed a partisan voter suppression campaign across America that is silencing the Black vote. With a critical election in November, it is imperative that we restore the heart of the VRA by enacting H.R. 4, the John Lewis Voting Rights Act of 2020 (formerly known as the Voting Rights Advancement Act).

Knowing all that is at stake, the Congressional Black Caucus continues the call for both vote-by-mail and safe in-person voting options. The CBC fought to secure $25 billion in emergency appropriations in the HEROES Act to support the United States Postal Service and ensure its more than 600,000 employees have the equipment they need to do their job safely.

This emergency funding is crucial to ensure Americans nationwide can fulfill their democratic duties to be counted in the 2020 Census and vote in upcoming primary and general elections. The HEROES Act was passed on May 15, 2020, but almost three months later, Senate Majority Leader Mitch McConnell has refused to take up this critical piece of legislation.

The right to vote is fundamental to our democracy. Yet from the founding of our nation, we have struggled to extend the franchise to all. We have come a long way because of the advancements of civil rights leaders and thoughtful legislators like the late Congressman John Lewis. But progress must be won each day and the Congressional Black Caucus will continue his fight to extend the franchise to all Americans.