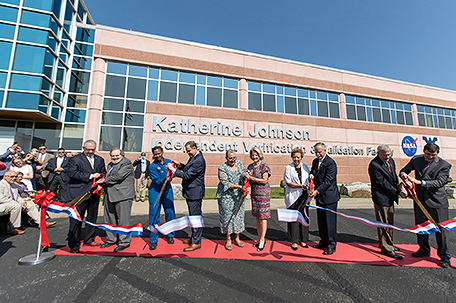 Eighty years ago she was one of three Black students handpicked to integrate West Virginia’s graduate schools, joining the graduate math program at West Virginia University in Morgantown. From there, the White Sulfur Springs, West Virginia, native went on to start a family, begin a career with NASA, and help put the first Americans in space and eventually on the Moon.

Fast-forward to a best-selling book and a blockbuster movie celebrating her accomplishments and that of her “hidden figure” colleagues — achievements recognized through our nation’s highest civilian honor, the Presidential Medal of Freedom, which she received in 2015.

And now, just 24 miles from where she took her first steps as a graduate student and began blazing a trail of opportunity and inspiration for countless others, NASA has dedicated a facility in honor of the storied NASA icon: the Katherine Johnson Independent Verification and Validation (IV&V) Facility in Fairmont, West Virginia.

“This is a momentous day because it’s like coming home,” Katherine Moore said. “To see her name on the building is very humbling. Our mother would say she didn’t do it for the accolades, but this certainly does add a few stars to her crown. We are very proud to represent her today.”

The IV&V facility, originally founded in 1993 to contribute to the safety and success of NASA’s highest-profile missions, was renamed in Johnson’s honor as a result of legislation sponsored by Capito and U.S. Senator Joe Manchin, and signed into law by President Trump in December 2018. The renaming was announced earlier this year and culminated with the ribbon-cutting ceremony.

During a reception following the ribbon cutting, Capito recounted Johnson’s contributions to the nation’s space program and what she means to West Virginians.

“It is fitting that the only NASA facility in West Virginia be named after a West Virginia native whobecame a pioneer in space exploration, but this rededication is about so much more than that,” Capito said. “Katherine Johnson’s is not just a name on this building. Her work also made what they do inside the building possible. Today, we celebrate Katherine Johnson, her life, her career, her achievements, and the achievements to come on Earth and in space because of her.”

With NASA focusing on returning to the Moon by 2024, Bridenstine reflected on how the agency’s human spaceflight program today continues to draw inspiration from Johnson’s legacy.

“Katherine’s life and legacy included key contributions to NASA’s initial foray into human spaceflight where her calculations, such as those helping Project Apollo’s Lunar Lander to synch with the moon-orbiting Command and Service Module, ensured mission safety and success,” said Bridenstine. “The IV&V Program at the Katherine Johnson IV&V Facility continues to support human spaceflight today, providing critical assurance for the software on NASA’s highest profile missions, including the International Space Station, Space Launch System, and supporting NASA’s return to the Moon with Artemis.”

Manchin, in a statement, praised the West Virginia native as a beacon of inspiration for all. “Katherine Johnson represents the best of our state; her hard work and determination brought this country to unprecedented new heights during the Space Race. Decades later, she is receiving recognition for her incredible work through the dedication of the Fairmont IV&V center in her name,” the statement read. “I look forward to seeing Katherine continue to be recognized for her contributions and I am proud to have helped make this renaming possible.”

Born in 1918, Johnson’s intense curiosity and brilliance with numbers led her to a distinguished career spanning more than three decades with NASA and its predecessor agency, the National Advisory Committee for Aeronautics. Among her professional accomplishments, Johnson calculated the trajectory for Alan Shepard’s Freedom 7 mission in 1961. The following year, Johnson performed the work for which she would become best known, when she was asked to verify the results made by electronic computers to calculate the orbit for John Glenn’s Friendship 7 mission. She went on to provide calculations for NASA missions throughout her career, including several Apollo missions.