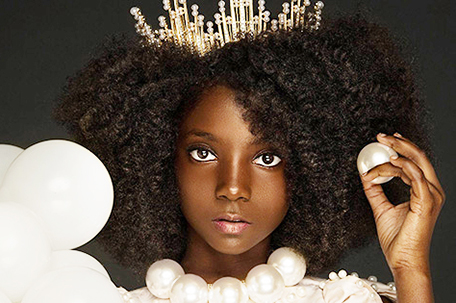 Kheris Rogers, a 10-year old girl who was being bullied for her darker skin, has turned the opportunity into a smart and successful business idea. Based in Los Angeles, Kheris has recently launched her very own unapologetic clothing line called “Flexin’ in My Complexion.” Her mission now is to boost the self-esteem of other dark skinned girls.

How it all went down 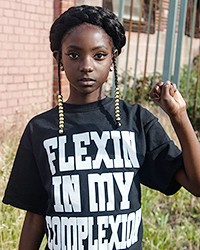 Kheris, models one of her T-shirts from her collection.

It all started when Kheris was being bullied by her classmates. But then her teacher gave the class an assignment to draw a picture of themselves, and she handed Kheris – not a brown crayon – but a black one.

Kheris says she went home crying, and her mom decided to just have her switch to a more diverse school to get away from the insults.

But her older sister, Taylor Pollard, was not happy that she had to do that. She was determined to boost her sister’s pride and confidence, and started taking and posting model style photos of Kheris on her Twitter account calling her “royalty.” With each photo, she would also use the hashtag #FlexinInHerComplexion.

One of her tweets went viral, and went on to get more than 100,000 likes, shares, and positive comments. And that was enough to give Kheris exactly what she needed: higher self-esteem and a great business idea!

Embracing who you are

Kheris did a stunning photo shoot series with a company called Creative Soul Photography, where she is seen truly embracing her beautiful skin tone and complexion. Several of the photos have gone viral on social media, and are bringing attention to her new apparel line.

She says that she was inspired by the positive words and the success of other “chocolate” girls like actress Lupita Nyong’o. “Now, I know I’m pretty, and I’m not going to let anyone tell me different,” she said in a recent interview with CBS Los Angeles 2.