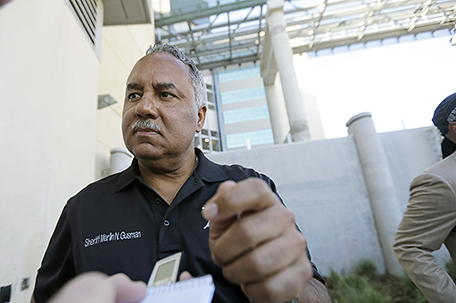 ABOVE PHOTO:  Sheriff Marlin Gusman speaks outside a new jail facility as buses transferring inmates from the old New Orleans jail arrive at the newly constructed facility in New Orleans, Monday, Sept. 14, 2015. Sheriff Gusman says the new building will be key to implementing needed reforms but the move comes as Gusman is under renewed criticism from the city and inmate advocates over a variety of issues arising from his stewardship of the lockup. (AP Photo/Gerald Herbert)

The suicide last fall was the second in a year at the new jail, which was supposed to help solve a myriad of longstanding problems including suicide attempts, inmate violence, drug use and guards using too much force. Instead, Jaquin’s suicide refocused attention on the conditions at the notoriously dangerous lockup, where reform has been slow.

U.S. District Judge Lance Africk has repeatedly lamented years of little or no progress in implementing court-ordered changes, although he expressed optimism at a hearing in June that a new jail director can turn things around.

“Needless to say,” Africk said, “15-year-olds should not be hanging themselves in the jail.”

Jaquin landed in adult jail when he and his uncle were charged with second-degree murder. Police said Jaquin and 35-year-old Tyrance Chancellor forced their way into a New Orleans apartment. There was a scuffle inside; Hasahn Shawl, 24, was shot to death.

The motive is unclear, but Shawl’s mother, Trellis Hughes, said she believes Chancellor had a disagreement with her son over a woman.

A witness told police Chancellor exited the apartment and said, “I don’t know why Jaquin shot him.”

Thomas was taken to a juvenile facility, but with prosecutors pursuing a murder charge, he was transferred to adult jail. The exact date of his transfer is unclear but he was there by early September, according to a lawsuit filed by his family. He killed himself Oct. 17.

He had an absentee father and an often-incarcerated mother. At 4, he was among tens of thousands of evacuees during Hurricane Katrina in 2005. He wound up in the care of his grandmother, Tina Thomas. She, too, had evacuated New Orleans, settling in her small hometown of Ville Platte, 160 miles away.

Before Jaquin’s death, a teacher, a minister and others told a judge in letters that he was well-behaved, respectful and enthusiastic about sports. A cousin, Barbara Thomas, said Jaquin was industrious, helping her husband fix bicycles and lawnmowers.

“He fixed one for himself and cut grass during the summer,” she recalled. 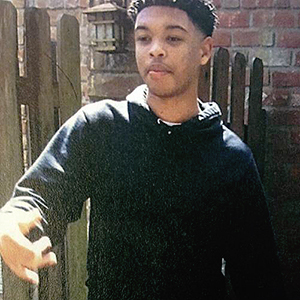 Last summer, he visited his uncle, Tina Thomas’ brother, there.

“The last thing my brother told me: ‘I’m not going to let nothing happen to him,’” Thomas said.

She said Jaquin worked with Chancellor at car washes, and the calls to her dwindled. The last time she talked to him before he was arrested, she detected slightly slurred words. She worried he was using drugs.

Jail was jarring for him.

Jeanine McNeal, a family friend who visited, said inmates stole his food and beat him. A sheriff’s office attorney confirmed at a City Council hearing that Jaquin was hurt in a fight with a 16-year-old armed-robbery suspect weeks before the suicide.

“My child was scared out of his wits,” Tina Thomas said. “He was like a little lamb with a bunch of wolves.”

The sheriff’s office said a guard was supposed to check on inmates in Jaquin’s area every 15 minutes. An investigation found that then-Deputy Keriana Alexcee spotted Thomas at a desk in his cell writing something (a suicide note was later found); 40 minutes later, surveillance video “captured the inmate standing on a stool inside of his cell, reaching for the area of the cell’s window.”

Alexcee passed the cell four times before noticing Thomas’ body suspended under the window – 90 minutes after he’s believed to have lost consciousness, an arrest warrant said. She pleaded not guilty to malfeasance.

About a year before the suicide, inmates were moved from the deteriorating, aging Orleans Parish Prison complex to a new jail, dubbed the Orleans Justice Center. Tasked with running it, Orleans Parish Sheriff Marlin Gusman hailed the move as a major step.

About six months after it opened, inmate Cleveland Tumblin, 63, hanged himself in a shower. An expert testifying in court said precious time was lost because a guard couldn’t open the shower door from the outside.

Jaquin Thomas died seven months later. A third suicide occurred this spring. An inmate overdosed this year, and, inmate lawyers say there was a lengthy, violent disturbance last March. Jail monitors said the facility was no cure for decades of poorly trained, overworked guards; inadequate health care; and other problems.

The Orleans Justice Center is, in effect, under new management. Gusman was under pressure for failure to achieve reforms he agreed to in 2012 to settle a lawsuit by inmate advocates and the U.S. Justice Department. He agreed to cede authority over the jail to a “compliance director.”

Hughes, mother of the man Jaquin was accused of killing, said it’s been hard to bear public sympathy for Jaquin. While the Thomas family said he should’ve been under constant supervision at the jail, Hughes questions why he wasn’t better supervised as a teen on the streets. “Who was watching him the morning my child was killed?” she said.