Teenager paid off college before he even started by selling newspapers 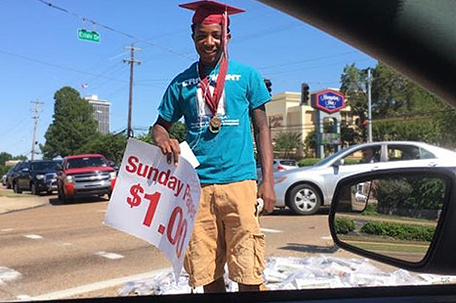 For five years, from the age of 12 to 17, Craigmont High School graduate Kevuntez King saved enough money to pay off his college tuition by selling newspapers in his neighborhood.

According to WMC Action News 5, King used hard work, planning and dedication to earn enough money to pay for college before he even starts.

“I just stay away from the negativity and try to always be positive,” King, a Tennessee native, said.

King said he grew up in a single-parent home with his mother, whose influence paved his way to success.

“She just taught me how to be independent like she had it, (and) she just wanted me to go get it myself,” he said.

From age 12 to 17, King sold newspapers with one goal in mind: to earn enough to pay for his entire college education. And he did just that.

He earned $200 every Sunday for five years straight. For those who may be wondering and trying to do that math, that accumulates to $52,000. Not to mention the tips and holiday/Christmas gifts from loyal and generous residents from time to time.

Having the ability to go to college without taking out loans and without asking your parents for help is a blessing. Over 63 percent of middle-class students receive some type of assistance when going to college. For African Americans, that number is even higher.

Think he only sold papers in his spare time? Think again. King was a 4.0 student and active on three different sports teams: golf, bowling and baseball. And he was voted prom king.

When asked what his plans for college? King proudly said that he was just accepted into Tennessee State University to study physical therapy and help those in need.

King has this piece of advice to share: “Make sure you surround yourself with people that’s trying to go up in life and not trying to bring you down. Just stay positive and always believe in yourself and push for it.”

Tennesse State issued a statement that it is proud to have King as a student. His mother is proud of him. And we are proud of him as well.

Tips on how to finance a college education