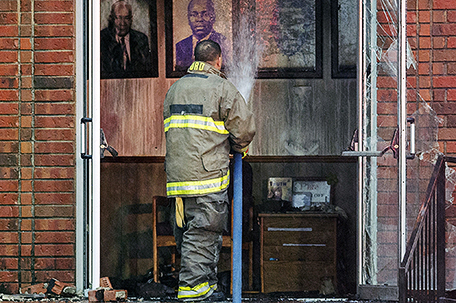 ABOVE PHOTO: Firefighters and fire investigators respond to a fire at Mt. Pleasant Baptist Church Thursday, April 4, 2019, in Opelousas, La. Authorities in southern Louisiana are investigating a string of “suspicious” fires at three African American churches in recent days. Fire Marshal H. “Butch” Browning said it wasn’t clear whether the fires in St. Landry Parish are connected and he declined to get into specifics of what the investigation had yielded so far but described the blazes as “suspicious.” (Leslie Westbrook/The Advocate via AP)

By Melinda DeSlatte and Kevin McGill

OPELOUSAS, La. — Each church catered to an African American congregation. Each graced a rustic, country setting. Each fronted a small cemetery. And each is now a charred disaster scene, the result of three conflagrations that brought echoes of civil rights-era violence to Opelousas, a city of about 16,000 people in rural St. Landry Parish, Louisiana.

The announcement that an arrest had been made was welcome news in and around Opelousas.

At a Thursday news conference, the suspect was identified as Holden Matthews, a 21-year-old White man. He faces three counts of simple arson of a religious building.

“I’m very relieved,” Harry Richard said Thursday. He is the pastor of Greater Union Baptist Church, the site of the second fire. “This takes a lot of the pressure off us in terms of who was behind all of this. I’m very relieved.”

“I would like to know whether he was working alone or not,” the Rev. Freddie Jack, of the Seventh District Missionary Baptist Association said Thursday morning. “We can’t let our guard down.”

In the days leading up to the arrest, pastors and parishioners at the churches acted with dismay — and a kind of restraint.

“It’s like the ’60s again,” said Earnest Hines, a deacon at Mount Pleasant Baptist Church — the site of the last fire.

Yet Hines, and others connected to the churches, were careful not to automatically label the fires as racist acts.

“I don’t know why this happened, and we don’t need to jump to conclusions,” said Hines, a member of the church for more than 40 years. “We need to let them investigate, let the evidence come out.” Jack and Richard expressed similar sentiments.

The churches were empty at the time of the fires, and no one was injured. Investigators with the U.S. Bureau of Alcohol, Tobacco, Firearms and Explosives were still combing the scene at Mount Pleasant and warning onlookers away on Wednesday, a week after the fire.

Investigators had retreated from the ruins of St. Mary Baptist Church in Port Barre, a town just outside of Opelousas and the site of the first fire on March 26. There and at Greater Union, which burned April 2, evidence of the fires’ intensity was more visible. Exterior walls of brick and wood had collapsed on rows of metal folding chairs at Greater Union. All that was left of what looked to have been an upright piano was the lattice-work of steel strings.