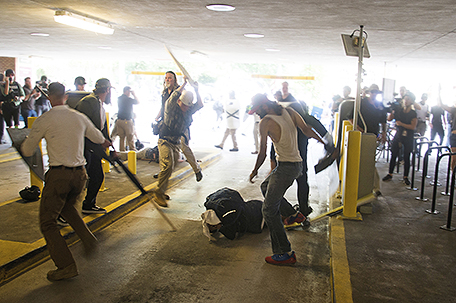 ABOVE PHOTO:  In this Saturday, Aug. 12, 2017 photo, DeAndre Harris, bottom is assaulted in a parking garage beside the Charlottesville police station after a White nationalist rally was disbursed by police, in Charlottesville, Va.  (Zach D. Roberts via AP)

The news site “The Wrap” reported Ohio police have arrested a man accused in the beating of Deandre Harris, a Black man attacked in a parking lot on Aug. 12 during the White supremacist rally in Charlottesville.

Daniel Borden, 18, was arrested Friday and charged with the malicious wounding of Harris, 20. Borden is being held at the Hamilton County Justice Center in Ohio, according to WCPO Cincinnati. An extradition date to Virginia has yet to be set.

Police are also looking for a second man identified as 33-year-old Alex Michael Ramos, who is wanted for malicious wounding in the same attack.

A member of a Southern Nationalist group says Harris and his friends instigated the attack.

Harris, an instructional assistant at Charlottesville City Schools, did not respond to messages from The Associated Press seeking comment. A GoFundMe page set up to help him with his medical bills quickly raised more than $125,000.

He suffered a broken wrist and a chipped tooth, and had eight staples in his scalp to close a head wound.

The Associated Press contributed to this article.