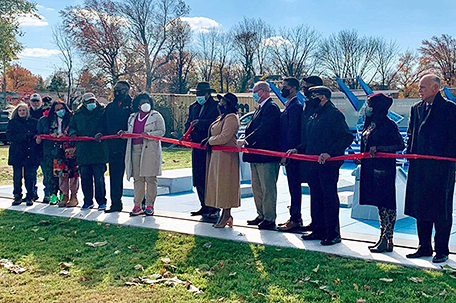 On November 19, the Fitness Court® was opened in Yeadon Community Park as part of improvements to the park and for the physical and mental health and well-being of the community. State Representative Joanna McClinton, Mayor Rohan Hepkins, President Monroe, Vice President Francis, and Councilors Johnson and Roadcloud were in attendance along with many of the sponsors, such as The Giant Company, family and recent predecessors, including Audrey Strauss, whom he replaced when his nomination was confirmed several weeks ago; Preet Bharara, who hired him; and Joon Kim, who he said “saw something special in me.”

He sparked sustained applause when he mentioned Geoffrey S. Berman, a Republican who served as U.S. attorney during much of Donald Trump’s presidential term. Berman became known in what prosecutors like to affectionately call the “Sovereign District of New York” for standing up to Washington’s demands and left office in June 2020 after a standoff with then-Attorney General William Barr over investigations into Trump’s allies.

Williams said Berman promoted him and “when the hour demanded true courage and independence and a demonstration of what it means to be a Southern District of New York prosecutor, he showed all of America what that means.”

Noticeably absent was Rudy Giuliani, a former Manhattan U.S. attorney who is now under investigation by that same office over whether he broke the law when he failed to register as an agent of a foreign country for his dealings overseas. Giuliani has said he did nothing wrong and was working for Trump at the time as his personal lawyer.