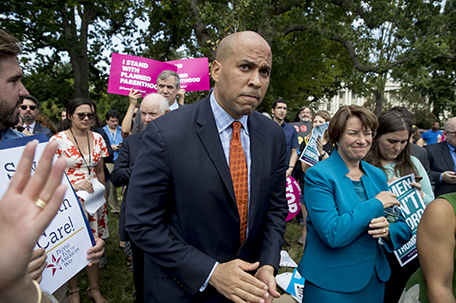 ABOVE PHOTO:  Sen. Cory Booker, D-N.J., center, accompanied by Sen. Amy Klobuchar, D-Minn., right, takes the podium at a rally of health care advocates, grassroots activists, and others outside the Capitol in Washington, Tuesday, Sept. 19, 2017. Senate Republicans begin another push to repeal the Affordable Care Act with the Graham-Cassidy proposal. (AP Photo/Andrew Harnik)

DENVER  — Republicans on the campaign trail this year will be eager to tout the potential benefits of their tax cut plan.

Voters like Jeanine Limone Draut, a freelance technical writer in Denver, have something else in mind: health care.

Failed efforts by congressional Republicans last year to repeal former President Barack Obama’s Affordable Care Act exposed not only deep divisions within the party but also revealed core benefits of the law that millions of Americans now take for granted. Draut is tired of the attacks and the uncertainty surrounding the law’s future.

“As a small business owner, it just wreaks havoc on how you do business,” Draut, an independent, said of the on-again, off-again repeal talk from Republicans. “I don’t know if either party has a solution. My vote is pretty closely tied to my livelihood.”

Both parties are paying attention, especially after a better-than-expected enrollment season under the health care law. Democrats especially have used health care to go on the attack, and the issue is coming up in congressional races in California, Colorado, Michigan, Washington and elsewhere. A Kaiser Family Foundation poll released Friday found health care as the top issue voters want congressional candidates to address.

Enrollment was especially robust in many of the states that operate their own insurance marketplaces, where enrollment periods were longer than on the federal exchange and promotional budgets were beefed up. Strong sign-ups came despite Republican attacks against the law and President Donald Trump’s administration taking several steps to undermine it, including cutting the federal sign-up period in half and slashing advertising.

California, Colorado, Connecticut, Idaho, Maryland, New York, Vermont and other states with their own exchanges saw enrollment approach or surpass 2017 levels. Minnesota’s health insurance exchange set a record for private plans with an enrollment period that was more than two weeks shorter than in 2017.

California’s state exchange, the nation’s largest, has reported more than 1.2 million renewals for 2018 and an additional 342,000 new customers. Its 2018 enrollment period doesn’t end until Wednesday, as does New York’s.

Crow has criticized Coffman’s vote for the GOP tax bill, which eliminated the tax penalty for people who don’t get health insurance. That move is expected to undermine the individual insurance market starting next year.

More than 22,000 people enrolled last year for coverage on the state exchange in Coffman’s district, which went for Hillary Clinton in 2016.

“People in our district recognize the progress we’ve made under health care. The fact that 20 million more people have health care matters — it matters a lot,” Crow said. “And under Trump, we are now moving in the opposite direction.”

Coffman encountered hoots and boos at town halls last year for his insistence that Obama’s health law be repealed, even though he eventually voted against the legislation. He insists that any replacement guarantee coverage for people with pre-existing conditions.

“His stance ultimately is about pre-existing conditions. It’s something everyone can relate to,” Sandberg said. “And if Democrats think they can hit him over the head with it, I think they’re going to be sorely mistaken.”

Democrats also are making health care a key part of their strategy in this year’s race to select a successor to Colorado Gov. John Hickenlooper. The Democrat last year worked with moderate Republican Gov. John Kasich of Ohio, lobbying Congress in an unsuccessful attempt to maintain the requirement that all Americans have health insurance.

Safeguarding the Obama-era health care reforms is essential to Colorado voters such as Draut, 45, who said her state exchange policy gives her peace of mind that she’ll be covered if she becomes ill, and Caleb Jackson, a 27-year-old graduate student at the University of Colorado-Denver.

Under the Affordable Care Act, Jackson was covered until last year on his parents’ policy, which allowed him to receive a $200,000 bone marrow transplant that stabilized a debilitating neurological condition. Now treatment-free, he has taken advantage of the law’s Medicaid expansion while he pursues an advanced degree in public administration and urban planning.

He said he switched his voter registration from Republican to Democrat because of the GOP’s repeated attempts to repeal the law.

“At this point I couldn’t, in good conscience, vote for people who voted to repeal the ACA,” Jackson said. “I think it will come back to haunt them.”

Democrats began using health care as part of their congressional campaign strategy last fall. That’s when the Democratic Congressional Campaign Committee ran its first radio and cable TV ads of the 2018 election cycle. They were in 11 Republican-held congressional districts and asserted that a Republican-run federal government would keep trying to undo Obama’s overhaul: “They’ll never stop,” the ad said.

Democratic committee spokesman Tyler Law said health care is an issue that should help his party in races across the country.

Jesse Hunt, a spokesman for the National Republican Congressional Committee, said his party won’t run away from the health care debate, but the focus will be different. If Democrats take control of the federal government in the future, he said, they are likely to push for government-run, single-payer health care.

In California, many Democratic candidates are unapologetic about their support for a single-payer system and say it’s time for the U.S. to follow the health care models in most other wealthy countries.

Among Republicans considered vulnerable in the state is Rep. Steve Knight, a former state lawmaker who has drawn criticism from progressive groups for his vote on the GOP health care bill. Knight’s 25th Congressional District stretches from the middle-class suburbs north of Los Angeles to the high desert. An estimated 34 percent of its residents rely on public health coverage.

He defended his vote, saying structural problems with the Affordable Care Act discourage people from buying insurance, which has driven up premiums and forced insurance companies to leave the marketplace.

Two leading Democratic contenders, attorney Bryan Caforio and Katie Hill, a former head of a nonprofit helping the homeless, have made health care a top issue and support a universal health care system.

“We know that the ACA has been a dramatic improvement from where we were, but we still have a ways to go before we get to a health care system that works for everyone,” Hill said.