A story of redemption and forgiveness– ‘We made it’: Imprisoned at 15, lifer goes free at 43 (part two) 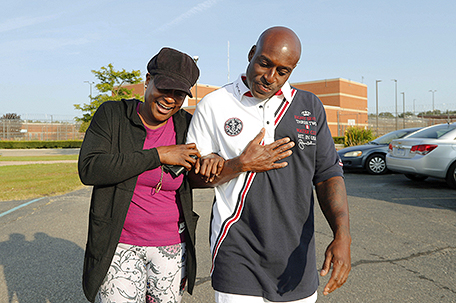 ABOVE PHOTO:  Bobby Hines leaves the Macomb Correctional Facility with his sister, Myra Jessie, in New Haven, Mich., Tuesday, Sept. 12, 2017. At 15, Hines had been condemned to life in prison without parole. Now he was out, a 43-year-old man navigating life in a world he left behind as an eighth-grader. (AP Photo/Paul Sancya)

DETROIT — As he stared out of the SUV window on a busy highway, probably Hines was surprised by the many small cars and couldn’t help but think of prison.

“I’m used to living in institutions. You ride in big vans and buses. … I’ll get used to it,” he vowed to himself. “I get used to everything.”

When his sister pointed to a shuttered train station that she speculated could be renovated to its former Beaux Arts splendor, Hines teased: “You know, Myra, when you do 28 years in prison, any building is nice.”

But when he saw parts of 7 Mile Road pocked with boarded-up stores and weed-filled lots, he lamented the decline of neighborhoods he remembered from more prosperous days. “Detroit used to be so beautiful,” he said, his voice trailing off.

“This neighborhood has been gone for 25 years, Bob,” his sister replied quietly. She’s her brother’s main support system. Their mother, who’d lobbied for reforms in sentencing laws, didn’t live to see this day, nor did their father. Hines’ twin half-siblings grew into their late 20s without ever meeting him.

Clutching a dog-eared, pocket-sized red address book bound by a rubber band, Hines pointed out childhood landmarks cemented in his brain: The church he attended with his grandmother. The field where his father, a firefighter, played in a baseball league. The park where he fell off the monkey bars as a toddler, ending with a dash to the emergency room.

Every place he stopped, there was a new first to experience.

He had his first meeting with his parole officer, who established the rules: He must visit every first and third Friday, pay $240 a year for parole supervision and $1,033 in restitution — for the funeral of his victim.

His first meal was at Royal Barbecue, where he pored over a five-page menu, thrilled he didn’t have to gobble his food down in 10 minutes. He settled on fried chicken, baked beans and coleslaw.

The restaurant owner greeted Hines. “Welcome back,” he said, shaking his hand. He later slipped Hines an envelope containing $100.

As he left, Hines rose, bowed his head and pointed a finger toward the sky. “Thank God,” he muttered.

Getting out, he said, is like being born again. “If you were to die and you were to go to hell and see all of the destruction and fighting and killing down there and God were to breathe life back into you and you were given a second chance — that’s what this is.”

The last stop for the day was his sister’s tidy green frame home in northwest Detroit at the end of a quiet, almost rural-looking street with a thicket of woods bordering her backyard. Across the street are community gardens where the locals, including Myra, grow vegetables sold in open-air markets.

Hines carried his life’s belongings — one box and a plastic bag of records and documents — into her house, where he was nuzzled by his sister’s blind Pekingese, Sasha. He then retreated to a picnic table in the yard with his most cherished possessions: the poems and essays he wrote in prison to keep himself sane. 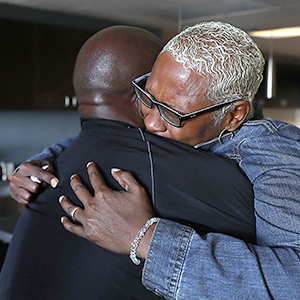 Valencia Warren-Gibbs hugs Bobby Hines after talking about the death of her brother, James, at his attorney’s office in Detroit, Sunday, Oct. 1, 2017. Hines said he was touched by Warren-Gibbs, and her father, Henry, who spoke in support of his release at his March 2017 resentencing hearing, saying he’d been punished enough. The judge imposed a 27- to 60-year sentence, paving the way for Hines to win parole. (AP Photo/Paul Sancya)

He thumbed through the stack of paper until he spotted a title, “100 Tools for the Thoughtful Thinker,” Hines’ musings about life, including his role in Warren’s death. According to court records, Warren, 21, took the jacket of a young man who owed him money for drugs. That man then enlisted Hines and others to confront Warren. Hines, who rejected a 20- to 40-year plea, was the last of the three involved in the shooting to be freed.

Hines doesn’t excuse his past.

“As a young man, I knew that I had hit rock bottom when I chose to be involved in the taking of another man’s life,” he wrote. “I had the mindset of … destroying myself and my community. … I’ve learned that when you take a person’s life … there is no real true way for you to make that death right with their family members. They will forever be scarred.”

He then read from a poem he wrote about time, a topic that fascinates him after so many years away.

“Time,” he said, “is losing 27 of your damndest years. Time is prison. Time is patience. Time is concrete and steel. … Time is fire and wrath. Time is Mr. James Warren that I killed on a block.”

He sat back to absorb his words, then explained that over time, he’d grown more aware of the pain he’d caused.

“The biggest thing in prison … is to be able to face what you did,” he said. “Once you’re able to face your fears of what you did, then and only then you can move on and be a better person.” It took him 10 years, he said, to realize his error. “I’m angry at myself for allowing my ignorance to lead me down that road.”

Hines said he was touched by Warren’s sister, Valencia, and their father, Henry, who spoke in support of his release at his March resentencing hearing, saying he’d been punished enough. The judge imposed a 27- to 60-year sentence, paving the way for Hines to win parole.

Warren-Gibbs was aware of Hines’ release date, and on that day she thought of her brother, James. She was jealous that Hines would be going home to his sister. “I wish it was my brother that I could see,” she said. “I felt guilty. I felt selfish to feel that way.”

But she was happy, too, and eager to see Hines have an opportunity to rebuild his life. “To me,” she said, “forgiveness is up there with oxygen.”

Hines understands the family’s loss left a hole in their hearts.

“If they need me anytime, I’ll be there for them 100 percent, you know, because they lost a loved one and I’m free,” he said.

“Let me take that spot. Let me give back.”

Nearly three weeks later, Hines and Warren-Gibbs sat at a table, sowing the seeds of a most unusual friendship.

Over about three hours at Hines’ lawyer’s office, the two talked about their families, Hines’ reunion with a childhood girlfriend and his new job at an industrial waste company where his sister works. They laughed at times, but spoke, too, of the tragedy that had landed him in prison.

“Everything you do in this world, you’ve got to pay for,” Hines told her. “You can’t get away with putting things in the universe and not thinking they’re not going to come back and get you.”

Hines maintained he never urged anyone to shoot Warren, but said he regrets his inaction. “Had I been wise enough … I could have stopped it.”

Warren-Gibbs told Hines she’d written him several letters over the years, but never felt comfortable enough to send them. Occasionally, she looked online at his inmate profile, hoping one day his face wouldn’t appear, signaling his release.

“I wish I could have done more to help,” she said. “I only want the best for you.”

As the talk turned to the future, Warren-Gibbs spoke of a new bond — “We’re connected,” she proclaimed with a smile — and told Hines she’d like it if he became something of a surrogate brother.

“If you need a brother, you got me,” he replied. “Anytime you need me, call me.”

The two exchanged phone numbers, posed for photos they immediately emailed to one another and promised to stay in touch.

Then they said their goodbyes, hugging tightly. Warren-Gibbs whispered, “Welcome home,” as a tear rolled down her cheek.

EPILOGUE: Warren-Gibbs recently told the AP she and Hines talk or text every day. He even sent her a photo of his first paycheck, and she plans to have him over for a family dinner. “It really feels,” she said, “like brother and sister.”