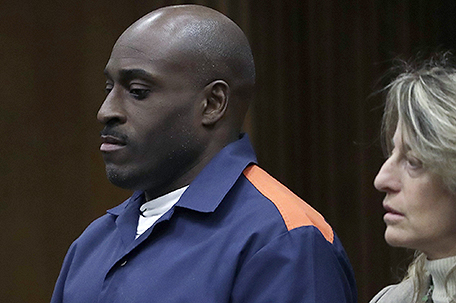 ABOVE PHOTO:  Bobby Hines, with his attorney Valerie Newman, stand before Judge Cynthia Gray Hathaway during a resentencing hearing in Detroit for the 1989 murder of James Warren. “As a man, I take full ownership for what I did,” he tells the judge. “I tore their family up, and I didn’t even realize what I was doing.” (AP Photo/Carlos Osorio)

DETROIT — Bobby Hines stepped forward, smiling as he embraced the sister of the man he was convicted of killing.

Locked up for 28 years, he’d long wanted to meet Valencia Warren-Gibbs, to talk with her about that night in 1989 when her older brother, James, was shot after Hines and two others confronted him in a feud over drugs.

At 15, Hines had been condemned to life in prison without parole. Now he was out, a 43-year-old man navigating life in a city he left behind as an eighth-grader. Slowly, he was checking off things he needed to do: He’d already found work, enjoyed a meal in an actual restaurant and learned how to take photos with his new cellphone.

And on this Sunday, 20 days into his freedom, he’d come to sit down with his victim’s sister and take responsibility for his role in Warren’s death.

“You know why?” he told her, tapping a forefinger on a table for emphasis. “I’m never going to forget what I did.”

He would not forget but he could make amends, move on and do his best to make the most of his extraordinary second chance. After nearly three decades behind bars, he was learning what it meant to be Bobby Hines again — older, hopefully wiser, and a stranger to the world of 2017.

“We made it,” Hines declared, almost inaudibly, as if he’d just crossed an imaginary finish line.

He walked out of prison at 9 a.m. promptly one September morning, arm-in-arm with his sister, Myra, who beamed, laughed and rested her head on her brother’s shoulder as they approached an SUV waiting to whisk him away.

More than 10,000 days had passed behind bars, but to hear him tell it, Hines had refused to believe he’d die on the inside.

“God ain’t going to let that happen,” he’d say, ever confident that one day he would find his way to freedom.

His release came after the U.S. Supreme Court last year extended a ban on mandatory life without parole for juvenile offenders to those already in prison, ushering in a wave of new sentences and the release of dozens of inmates in states from Michigan to Pennsylvania, Arkansas and beyond.

Other former teen offenders still are waiting for a chance at resentencing in states and counties that have been slow to address the court ruling, an earlier Associated Press investigation found. In Michigan, prosecutors are seeking new no-parole sentences for nearly two-thirds of 363 juvenile lifers. Those cases are on hold until the Michigan Supreme Court, which heard arguments this month, determines whether judges or juries should decide the fate of those inmates.

Hines, one of at least 99 Michigan lifers already resentenced, wasn’t the gunman. But prosecutors branded him the ringleader in the shooting of James Warren, arguing he’d provoked two other teens, saying something like, “Pop him” or “Let him have it,” when the trio confronted him. 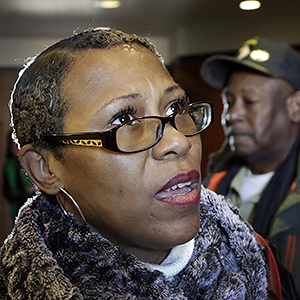 Valencia Warren Gibbs, standing next to her father, Henry Carpenter Warren Jr., speaks to reporters at the Frank Murphy Hall of Justice in Detroit. Gibbs and her family have forgiven Bobby Hines for the 1989 murder of her brother, James Warren. “He was 15 years old,” she said during Hines’ resentencing hearing. “I forgave him the day that it happened. … I want him to be out. I want him to give himself a chance that he didn’t give himself … that day.” (AP Photo/Carlos Osorio)

When Hines left prison on Sept. 12, he faced the same hurdles as other released lifers: He had no money, no job history and no experience as an adult in society — a world he was told he’d never inhabit again. For some, walking out after 30, 40, even 50 years feels a bit like time travel.

On Day 1, Hines insisted that wasn’t true for him.

Sentenced to life without parole for his role in a murder at age 15, Bobby Hines is free at 43. He reads a poem that he wrote while in prison.

“I’m not overwhelmed,” he said repeatedly to his sister, lawyer and anyone else within earshot. “It’s not as hard as I thought it would be. … I did 28 years, but I don’t even feel like I’ve been in an institution.”

He was a small kid, just 5-foot-3, when he suddenly found himself trading a middle school ID for an inmate number. Prison was such a brutal environment, he said, he called it the Serengeti, after the African plains teeming with wildlife where survival of the fittest is the rule. In his first decade he got in several fights. Then older inmates became surrogate fathers, teaching him how to behave and keep his cell clean.

“After awhile,” he said, “you start to adapt … to depend on incarceration more and more.”

Eventually, he earned his high school equivalency diploma, took a preparatory business college course and completed a slew of self-help and training programs.

In June, after he became parole-eligible, Hines was transferred to the Macomb Correctional Facility north of Detroit to join other juvenile lifers who have new sentences and will eventually be released. Prison officials assembled these inmates in one place as they expand existing programs to help them learn about finances, technology and other aspects of daily life. Those with parole dates have access to educational and job training programs that were previously unavailable to them.

“We’re trying to do a little more because this is such a unique situation,” said Chris Gautz, spokesman for the Michigan Department of Corrections. These inmates had expected to die in prison, he said. “We want to set them up in a way they’re not likely to come back.”

Most of the juvenile lifers released so far across the U.S. have been out of prison a year or less. Corrections officials in Pennsylvania, Michigan and Louisiana, which together had nearly 1,200 of these inmates, said that, to date, none has violated parole or committed another crime.

Last winter, Hines began meeting with a volunteer from Project Reentry, a program within the state appellate defender’s office in which graduate social work students help juvenile lifers gear up for release. One student met with Hines, visited his sister to plan his living arrangements and took photos of Myra’s home as part of a comprehensive post-release plan presented to the resentencing judge.

Hines also had candid conversations with his lawyer, Valerie Newman, a state appellate defender who has secured the release of about a half-dozen juvenile lifers in Michigan in the last year. Her advice to Hines, as it has been with others: Take it slowly.

Bobby Hines talks with his attorney, Valerie Newman, who has secured the release of about a half-dozen former juvenile lifers in Michigan.

“You have to think of yourself as a small child,” she said. “You’re learning to walk; you have to take baby steps. Everything has to be done in small increments, and you have to be good to yourself. There’s a big tendency to get very frustrated. There’s a huge learning curve.”

Newman expects Hines will do well because of his sister’s support, his willingness to learn new things and his appreciation of his freedom.

“He carries so much guilt for what happened and what he did,” she said. “A lot of clients feel enormous remorse for what they did, but they learn to come to terms with it. They just want to give back.”

[Part two of Bobby Hines’ story in next week’s SUN]