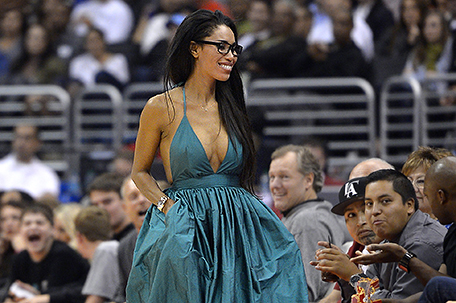 ABOVE PHOTO:  V. Stiviano, center, walks down the sideline as the Los Angeles Clippers play the Sacramento Kings during the first half of an NBA basketball game, Friday, Oct. 25, 2013, in Los Angeles.  (AP Photo/Mark J. Terrill)

Just who is V. Stiviano?

LOS ANGELES — V. Stiviano, the woman whom Donald Sterling was talking to when he made racist remarks, is “very saddened” by his lifetime NBA ban, and she didn’t release the recording of their conversation, her lawyer said Tuesday.

Stiviano was born Maria Vanessa Perez in October 1982 in Los Angeles, but successfully petitioned to change her name to V. Stiviano in 2010. There’s no explanation for what the name means, but her stated reason in the court filing was, “Born from a rape case and having yet been fully accepted because of my race.”

Somebody released it “for money,” but it wasn’t Stiviano, the attorney said.

“My client is devastated that this got out,” he said.

Nehoray previously said the recording posted online is a snippet of a conversation lasting roughly an hour.

In the recording, the Los Angeles Clippers owner apparently is upset with Stiviano for posting photos online of herself with Lakers Hall of Famer Magic Johnson and Dodgers outfielder Matt Kemp.

“It bothers me a lot that you want to broadcast that you’re associating with black people. Do you have to?” Sterling asks.

On Tuesday, NBA Commissioner Adam Silver condemned the remarks. He banned Sterling for life from any association with the league or his team, and Silver fined him $2.5 million.

Stiviano has been described as Sterling’s girlfriend.

In March, Sterling’s wife, Rochelle, sued Stiviano, seeking the return of more than $2.5 million in lavish gifts the woman allegedly received from her husband, including luxury cars and a $1.8 million duplex.

It accuses Stiviano of engaging “in conduct designed to target, befriend, seduce, and then entice, cajole, borrow from, cheat and/or receive as gifts transfers of wealth from wealthy older men whom she targets for such purpose.”

Stiviano’s attorney has filed documents to dismiss many of the accusations and denies that she took advantage of Sterling, describing him as having an “iron will” and being one of the world’s shrewdest businessmen.

Nehoray told the Times that Stiviano and Sterling didn’t have a romantic relationship.

“It’s nothing like it’s been portrayed,” the lawyer said. “She’s not the type of person everyone says.”

She was a hard-working waitress and did volunteer work helping crime victims before becoming an “archivist” for Sterling, he said.

“She had no association with any rich people before this,” he said.

The Los Angeles County district attorney’s office said Stiviano was a volunteer with its Victim-Witness Assistance Program in 2010 and 2011, the Times said.