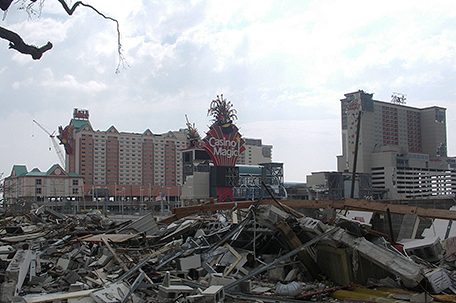 When Europe lost the home of Mozart to war, America rebuilt it.

But when the United States lost the home of jazz to a flood, it sold it to private speculators.

The first time I saw New Orleans, I entered an empty city. The streets were marked with chalky streaks of salt and toxins left behind by the waters that had filled them and the stench of rotten things filled the air.

It was September 19, 2005, three weeks after Katrina had laid waste to the city when the levees were breached by the sea and the contents of the canals rushed into the roads, yards and the living rooms of the city’s poorest residents.

By the time I arrived, the only vehicles on the streets were the camouflage-painted Jeeps of the National Guard. After abetting mayhem with shoot-to-kill orders against the city’s most desperate citizens, many on the New Orleans police force simply fled the city.

With colleagues from the labor union I worked for at the time, I visited the Greyhound bus depot, which was housing the inmates of the infamous Angola Correctional Facility in its bus bays. Improbably, a white Rolls Royce sat parked in front of the station. Inside, a prison doctor implored me to find a way to get him some antibiotics from the outside world, as well as basic medical supplies like sutures and bandages. In the ostensible greatest nation on earth, a city that had undergone the level of devastation that New Orleans had couldn’t count on its government to provide a doctor with the things he needed to care for those in his charge. But those in his care were prisoners, nearly all of them black. So you know how that goes.

The convention center, now famous for the video footage of starving, thirsty people crammed into an arena in which the dead were left to rot among them, was empty. The Superdome, another empty “refuge of last resort” bore a gaping hole in its roof. The awning of a Popeyes Louisiana Kitchen fried-chicken franchise lay upside-down on a Canal Street sidewalk.

Today, they say, New Orleans is back. Except that it isn’t. The local economy may be humming, but absent are some 100,000 people who fled the city when the storm and its aftermath took everything from them. Many of them descended from families whose presence in the town spanned decades. Nearly all of them were black.

When you think of New Orleans, you likely summon to mind the scent of gumbo, the sound of jazz or the mysteries of the voodoo that seems to underlie nearly all spiritual expression in the Crescent City. Each of these things is a touchstone of the city’s unique culture, born of a very particular mix of ethnic and racial groups and a whole lot of pain. The history of New Orleans—the pre-Katrina New Orleans—holds critical pieces of the nation’s history as a whole, and the nation’s culture writ large.

But America doesn’t like to see the city that way, and so it was left to drown.

In New Orleans, the legacy of slavery and the slave trade is everywhere. There’s nothing subtle about it and it can’t be explained away. Its historic buildings include those from which enslaved people were auctioned. The voodoo is rooted in the West African culture of the Yoruba people; the rhythms of jazz derived from the individual rhythmic patterns assigned each of the Yoruban deities. The okra in your gumbo is there because of the seeds carried by the abducted through the Middle Passage. They also carried, along with the rhythms of the orisha, the seeds of the blues, the musical form from which nearly all American popular music springs. And the lament of Native Americans, nearly erased from the landscape of the Eastern states, still resonates there. The Choctaw people, Kristina Kay Robinson reminds us in her pensive essay in “The Nation”, “named the city Bulbancha, ‘Many Languages Spoken There.’”

A year later, I went back to New Orleans for the first anniversary of the storm. I followed a traditional NOLA funeral procession, complete with second-line brass bands and a glass-windowed, horse-drawn hearse, conceived in commemoration of those who perished in the storm.

After a big concert a day or two later, I spoke with Cyril Neville, the percussionist in one of the city’s musical dynasties. He told me that the rest of the country just doesn’t see New Orleans as part of the United States. To most Americans, he said, “We’re the Northern-most point of the Caribbean.”

(At the same concert, trumpeter Wynton Marsalis, the son of another of the city’s great musical dynasties, cautioned the audience to not voice their grievances too loudly, lest they turn the politicians against the city just as it was appealing for redevelopment money. It was a controversial speech.)

New Orleans, added to the United States through Thomas Jefferson’s Louisiana Purchase, is as American a city as you can get. But the American story told by New Orleans is the one we would like to forget: the mother standing on an auction block as her children look on, the racial mixing of the oppressor and the oppressed, the disproportionate level of poverty among the descendants of the Africans, the epic levels of police brutality against black people. We want the gumbo, but not the history of how it came to be.

Today, New Orleans, it’s said, is on its way up, but the city’s black residents don’t see it that way. Maybe that’s because the windfalls of the city’s redevelopment have not fallen to them. The white people who are winning in the new New Orleans are not simply those who were always part of the city’s life, but many who washed in with the flood of white people who came to the city to be part of its on-its-way-up-ness. Writing in The Washington Post, Abby Phillips notes that “84 percent of African Americans now in New Orleans lived in the city before the storm, while only 61 percent of whites did.”

The Christian Science Monitor reports that while income levels for the black people of New Orleans have barely budged since the storm, white residents saw their incomes jump by 35 percent.

Some 72 percent of those displaced by the storm are black, Phillips reports, while only 14 percent are white. In the Monitor, Patrik Jonsson writes:

Federal buyout and recovery grants to homeowners were based largely on pre-storm property values, which meant that the primarily poorer African-American residents who are now seeing half-million-dollar homes being built next door tended to receive the smallest rebuilding grants.

In short, New Orleans, long a majority-black town, is becoming much whiter. With 100,000 of its black residents gone, and the city dependent on the tourist trade, it risks becoming a Disneyesque stage set designed to represent a prettified version of culture that no longer exists, at least not in its fullness.

When I reported on the first anniversary of Katrina for the Prospect in 2006, I stole a minute with the New Orleans pianist and vocalist Dr. John, who was furious over the city’s loss of population, and the fact that many of those left behind still didn’t know where their friends and family members were.

“Over half this city don’t have a clue [where their people are],” he said. “They’re either missin’ in action, dead in St. Gabriel and nobody knows who they are—and I could go on with a list of gripes. So there, babe.”

And then there’s this: After World War II, the United States rebuilt Salzburg, the Austrian city that gave birth to much of Europe’s great classical music. During the years of the Marshall Plan, American leaders understood that the rebuilding of Europe and the safeguarding of its living cultural history was critical to the preservation of Western civilization and peace on the continent.

The redevelopment of New Orleans, on the other hand, birthplace of America’s great classical music—jazz—has been left to the enterprise of real-estate speculators, with no regard for the city’s living cultural history. Among the 100,000 missing are many strands of that history.

The saddest part of this tale, however, are the ways in which New Orleans’s story continues to be so very American. It’s the 21st-century version of the same old, same old—private capital reigns supreme, at the expense of all that is humane.