“Stakes Is High”– Police killings of unarmed blacks is a national travesty! 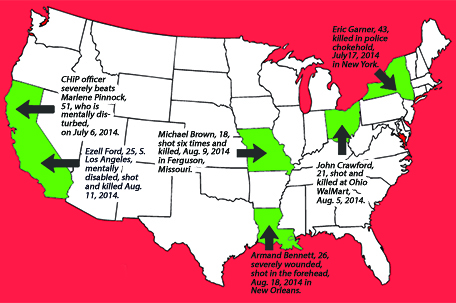 ABOVE PHOTO:  Between 2006-2012 the U.S. Justice Department estimates there were 96 cases a year of a white police officer killing a black person.

You ever get a song stuck in your head?

It’s usually because it’s something that you just heard. For example, I had Iggy Azalea’s “Fancy” stuck in my head for a solid week. Because of this, I believe that Samsung is the Devil and I will never buy their products. That was torture.

But last Wednesday, “Fancy” was replaced by DeLa Soul’s “Stakes Is High”.

Now I love DeLa Soul and “Stakes Is High” is a ringtone on my phone. But, that’s not why it’s been on a continuous loop in my head since Wednesday.

It’s because I’ve seen pictures of a young, dead Black boy lying in the street after being shot by a cop.

It’s because he was unarmed.

It’s because he was the fourth unarmed Black person this month who came across an armed White person, in all four cases a police officer, and wound up with a tag on his toe at the morgue.

It’s because this incident has caused a suburb of a major American city to blow up and take the First Amendment of the Constitution with it, reminding a lot of people of what was going on the year I was born, 1964.

It’s because if we’ve learned nothing else from everything that’s happened since Michael Brown was killed by Ferguson police officer Darren Wilson last Saturday, we should have learned that the stakes are indeed high.

Ferguson residents began mounting protests of Brown’s death on Sunday night. Because protests sometimes attract people who have the wrong idea of what protest is about, windows were broken, looting happened, and fires started, all stuff that can make the police kind of take a dim view of your chosen mode of expression.

But I didn’t know just how dim of a view the police were taking until I saw a picture of two police officers dressed in combat gear, brandishing semi-automatic weapons and sitting on a tank on my Twitter feed. That’s two police officers. On a tank. In a suburb in a major American city.

Not in Afghanistan. Not in Mozul. In a suburb of St. Louis. Home of the Cardinals. Not too far from where St. Louis Rams rookie Michael Sam hopes to make history as a pro football’s first openly gay player. 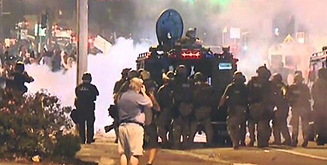 Kinda makes you stop and think, doesn’t it?

When I got home and started seeing folks getting tear gassed, including an AlJazeera reporter doing a live shot, I kinda knew I wasn’t going to sleep. You don’t want to see peaceful protestors getting hit with tear gas, especially when they’re standing in their own front yards.

In fact, so much tear gas has been flying around Ferguson that residents have been getting advice from Palestinians on Twitter on how to handle being tear gassed.

(Use Coke or milk to clean your face. Water just makes it burn worse….)

But that this was happening is yet another example of just how badly the powers that be in Ferguson have handled this situation from the very beginning.

From not allowing medical professionals to tend to Brown quickly enough to save his life, to leaving his lifeless body to bake in the sun for four hours, to not releasing Wilson’s name or his incident report, to hiring the all-White public relations firm that just made matters worse, this has been the gang that can’t shoot straight.

And they really screwed up when they started arresting reporters. Between last Wednesday night and the time I’m writing this, 15 folks who do my job found themselves hearing the “clink-clink” sound from “Law and Order”…

(Not really…it was more like the “rippp” of a zip tie, but you know what I mean…)

Now I guess I should get to the reason why “Stakes Is High” has been stuck in my head. Why the stakes are high. Why attention must be paid and paid now.

As I mentioned earlier, Michael Brown was the third of four unarmed Black men who came upon an armed White man and ended up dead this month.

And August isn’t over yet.

On Aug. 11, Ezell Ford, 24, was shot in the back by the Los Angeles Police Department. Police say that he lunged for an officer’s gun, which kind of makes me scratch my head considering the whole “shot in the back” thing.

John Crawford, of Beavercreek Ohio, was looking at an unloaded BB gun at a WalMart in his town and got shot to death when he didn’t put it down quickly enough. Being shot while looking at a BB gun in a place that sells BB guns usually doesn’t happen, but it happened here.

And yes, I’m including Eric Garner’s death at the hands of a New York police officer in this. He may have died of a chokehold, but the cop was armed.

But when these things happen, another process inevitably starts, and we’ve seen it too this week:

A young, unarmed, Black man and White armed person get into confrontation.

Blacks get mad and take to the streets.

Authorities, aided by certain media outlets, take apart dead Black person’s life to find whatever can be found to try and paint this person, who is not there to defend his or herself, as a “thug”, and thus deserving of being shot to death.

(In Michael Brown’s case, it’s a combination of stolen cigars and pot in his system. And can someone tell me where folks are getting this weed that makes people violent? Most of the weed heads I know don’t want to attack anything but a cheesesteak when they get high…much less a cop…)

The trial of the person who did the shooting becomes a referendum on the “Innocence” of the person who’s been shot, and that’s only if charges are filed and the person goes to trial at all. Which leads to the person who did the shooting getting off and Black parents left to give their Black male children a list of things they’re not allowed to wear or do in order to keep from being shot by people who are already so terrified by your very existence that you could be walking down the street in a suit carrying a briefcase and you still might catch a bullet.

This, of course, also leads into the whole “What about Black on Black Crime?” thing. You see, Black folks aren’t allowed to worry about the deaths of four unarmed Black men at the hands of the police and the deaths of young men in their neighborhoods at the same time. Oh, and White on White crime doesn’t exist. Or at least that’s what we get told in so many words.

Now if that’s not enough, here’s some statistics that we need to pay attention to: Ferguson is roughly 60 percent Black. Yet, the Mayor is White, the Police Department is predominately White, and so is City Council. How’s that happen in a place that’s 60 percent Black, you might ask?

Voter turnout in the last election was a lofty 12 percent.

I wish that I could say that Ferguson’s the exception, but it’s the rule unfortunately. And because of this, Black folks, despite having one of us in the Nation’s Highest Office, are still catching Hell. We have to remember that politicians, like just about anyone else in  customer service, do their best work for the people who support them.

To make sure that you don’t have police departments that do this kind of thing and invent the kinds of cover ups that would make most novelists jealous, you have to make sure that people are accountable to you. The best way to do that is by voting.

That and following up with being a pain in the behind to the people who get elected, whether you voted for them or not.

When people believe that they can do anything they want to you, and that you’ll do nothing because you’re so distracted by reality television, or what’s going on in Jay Z and Beyonce’s marriage that you’re not paying attention, they’re going to take advantage.

And if you’re not careful, that advantage taking is going to occasionally come in the form of people getting hit with tear gas in their front yards in a suburb of a major American city.

The stakes is high folks.