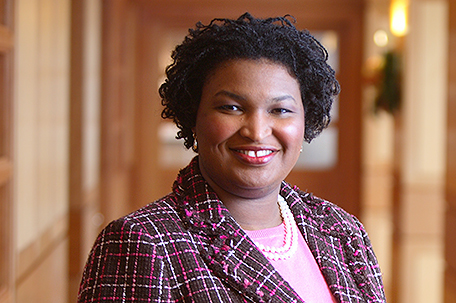 ATLANTA –Stacey Abrams will launch her campaign for Georgia governor on Saturday, a widely expected step for the first woman to lead a party in the state’s legislature.

In an interview with The Associated Press, Abrams said her pitch to voters is creating a state where residents can thrive rather than simply survive. She’s making a clear effort to reach voters outside her metro Atlanta base by kicking off her campaign in the south Georgia city of Albany on Saturday.

Abrams has been the top Democrat in the Georgia House since 2010 – the first woman and the first African American to hold the post. She would make history again if voters choose her as term-limited Gov. Nathan Deal’s successor: She would be the first African-American woman to become a governor in the U.S.

However, victory is far from certain in a state where Democrats have struggled to close a persistent gap. Not even the path to her party’s nomination is certain. State Rep. Stacey Evans already has launched a campaign that could splinter Georgia Democrats.

Progressive groups have criticized Abrams for standing with Deal and Republican legislative leaders in 2011 when they cut back the HOPE scholarship program when the state-run lottery’s revenues failed to keep up with demand. However, Abrams says the compromise let Democrats negotiate fewer cuts to the state’s prekindergarten program which is also lottery funded.

Evans, who represents the Atlanta suburb of Smyrna, frequently touts the HOPE program that allowed her to become the first college graduate in her family and has telegraphed a run focused on that issue.

Abrams, a Yale-educated attorney who also writes romance novels under the pen name “Selena Montgomery,’’ has represented portions of metro Atlanta since 2007.

The Mississippi native formed a web of national connections since founding a nonprofit in 2014 that focuses on registering minorities to vote that is expected to boost her fundraising base. Georgia, like other southern states, has rapidly become more diverse but not all Democrats agree they can win statewide by focusing on newly registered voters and de-emphasizing suburban or rural white voters.

Abrams said this week that a winning campaign will require a broad “coalition’’ but maintained that registering new voters is also a critical task.

“I plan to bring it home and close the gap completely by not deciding that you can only do one or the other,’’ she said. “You’ve got to walk and chew gum at the exact same time.’’

Abrams said she’ll highlight her ability to compromise with GOP lawmakers who control Georgia’s legislature and all statewide offices and a willingness to work with anyone. But she also became a top surrogate for Hillary Clinton in Georgia last year and leads a campaign dubbed “Georgia Resists’’ promoting House Democrats’ agenda.

“There is no conflict between cooperating where you can and competing where you should,’’ she said. “Resistance to the Trump administration is resistance to sexism, to racism, to xenophobia … to the destruction of our planet.’’

Democrats hope an anti-Trump message could help statewide candidates in 2018, pointing to the groundswell of support for the party’s candidate in a June 20 special congressional election. Former congressional staffer Jon Ossoff is locked in a tight race with Georgia’s former Republican Secretary of State Karen Handel in the 6th District contest despite the Atlanta suburbs’ conservative leanings.