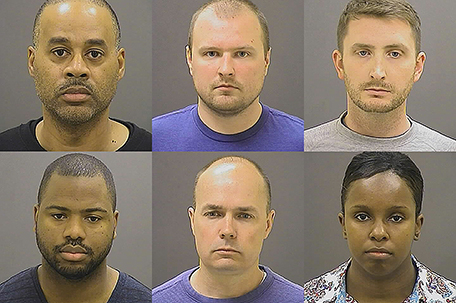 “The findings of our comprehensive, thorough and independent investigation, coupled with the medical examiner’s determination that Mr. Gray’s death was a homicide that we received today, has led us to believe that we have probable cause to file criminal charges,” Baltimore State Attorney Marilyn Mosby said in a press conference Friday.

Officer Caesar R. Goodson Jr. – who is black – drove the van in which Gray was placed. He was charged with second-degree murder –depraved heart, which could result in up to 30 years in prison. He was also charged with involuntary manslaughter and manslaughter by vehicle. 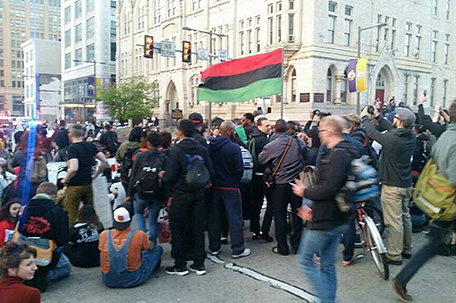 The dozens of people attending the press conference held on the steps of the Baltimore War Memorial cheered and shouted “Thank you, Ms Mosby,” and “Justice for Freddie.”

Gray, 25, was arrested on April 12 by Lt. Rice and Officers Nero and Miller and placed into a Baltimore police van driven by Officer Goodson.

When police arrived at the Baltimore Police Department’s Western District station, Gray was unconscious and medics were called. Gray was then taken to the University of Maryland’s Shock Trauma Center and remained in a coma until his death on April 19th.

In a police report which detailed the reason for Gray’s arrest, Officer Miller wrote the following:

“[The defendant] fled unprovoked upon noticing police presence. The defendant was apprehended in the 1700 block of Presbury Street after a brief foot chase. This officer noticed a knife clipped to the inside of his front right pants pocket. The defendant was arrested without force or injury. The knife was recovered.”

Video taken by witnesses to Gray’s arrest had already been released to the media, showing a handcuffed Gray being half-carried by officers and loaded into the van. The video clearly showed that Gray was conscious, and he could be heard talking before being put into the back of the van.

A preliminary autopsy released on the after Gray’s death indicated that his spinal cord was severed and his larynx crushed.

“When Mr. Gray was placed inside that van, he was able to talk, he was upset, and when Mr. Gray was taken out of that van he could not talk and he could not breathe,” Baltimore Deputy Police Commissioner Jerry Rodriguez said in an April 20th press conference. “I know Mr. Gray suffered a very traumatic injury, but I don’t know if it happened prior to him getting into the van or while he was in the van.”

Rodriguez told reporters that the six officers involved in Gray’s arrest and transportation were suspended with pay. He also said that the officers reported that they made three stops before taking Gray to the station – to fill out paperwork, to put leg restraints on Gray, and to pick up another prisoner. Rodriguez additionally confirmed that Gray’s request for medical assistance had been ignored, and that he was not seat belted in the van as required by a Baltimore Police Department general order.

There was an immediate suspicion that Gray was the victim of a “rough ride,” in which a suspect in placed in the unpadded back of a police van without seat restraint, and the driver makes a series of sudden stops causing the suspect’s body to slam against the van’s steel walls.

Peaceful protests in Baltimore gave way to what was deemed a riot on Monday, April 27th, the day of Gray’s funeral and resulted in a 10 p.m. curfew being put into effect.

Protests were also held in other cities like New York, Cleveland, and Philadelphia.

“If we watch what happened in Baltimore and don’t stand up and say it’s not acceptable, what can we say when it happens to us?” said Yusef Iman Worsham-Polk, one of the coordinators of the Philadelphia protest.

Polk, who is co-founder of Our Circle – a mentoring program of young men – added: “You’ve got to earn your right to complain.”

On Wednesday, the Washington Post published a story based on a leaked police report which said the inmate who was in the van with Gray believed that Gray intentionally attempted to injure himself.

The prisoner was separated from Gray by a metal partition and could not see him but, according the leaked report could hear him shouting and banging himself around.

The Washington Post said that the anonymous Baltimore police investigator who had leaked the report to them asked them not to use the prisoner’s name, fearing that he would be the target of retaliation.

However, that prisoner – Donte Allen – came forward on Thursday and said he had made no such statement.

Also on Thursday, Baltimore police investigators sent a report to Mosby which revealed that footage from a grocery store video camera showed the police van had made a fourth stop not reported, and that the medical examiner had found that in addition to his other injuries Gray had a broken neck, and a wound to his head which matched a bolt in the rear of the van.

But Mosby said Friday that her own office had already obtained all of that information on their own.

“The manner of death deemed homicide by the Maryland Medical Examiner is believed to be the result of a fatal injury that occurred while Mr. Gray was unrestrained by a seatbelt in custody of the Baltimore Police Department wagon.”

At the time of this filing, five of the six charged police officer were in custody.

Toward the end of the press conference Mosby acknowledged the protests and uprisings in response to Gray’s death, urging those who are angry or hurt to “channel that energy peacefully as we prosecute this case.”

Then, addressing Baltimore’s youth, she said: “I will seek justice on your behalf. This is a moment. This is your moment . . . You’re at the forefront of this cause and as young people, our time is now.”