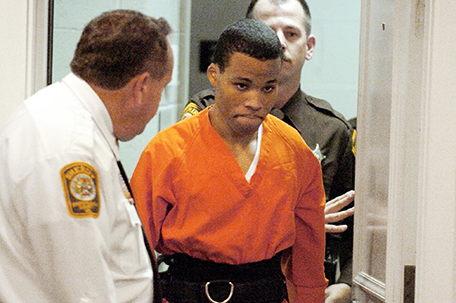 ABOVE PHOTO:  In this Oct. 26, 2004, file photo, Lee Boyd Malvo enters a courtroom in the Spotsylvania, Va., Circuit Court. A federal appeals court is set to hear arguments Tuesday, Jan. 22, 2018, in a case focusing on the life sentences given to D.C. sniper Malvo. A federal judge in Virginia found that Malvo is entitled to new sentencing hearings in light of a U.S. Supreme Court ruling that mandatory life sentences for juveniles are unconstitutional. Malvo was 17 when he was arrested in a series of random shootings that killed 10 people and wounded three in Virginia, Maryland and the District of Columbia in 2002. (Mike Morones/The Free Lance-Star via AP)

RICHMOND, Va.  — A lawyer for a sniper who terrorized the Washington, D.C., region more than 15 years ago has asked a federal appeals court for a chance to seek lighter sentence.

The 4th U.S. Circuit Court of Appeals heard arguments Tuesday in the case of Lee Boyd Malvo, who was 17 when he and an accomplice killed 10 people in 2002.

A federal judge ruled last year that Malvo is entitled to new sentencing hearings in Virginia under a U.S. Supreme Court ruling that banned mandatory life-without-parole for juveniles.

A lawyer in the state attorney general’s office urged the appeals court to keep Malvo’s life sentences in place. He said Malvo waived his right to appeal when he agreed to a plea deal that took the death penalty off the table.