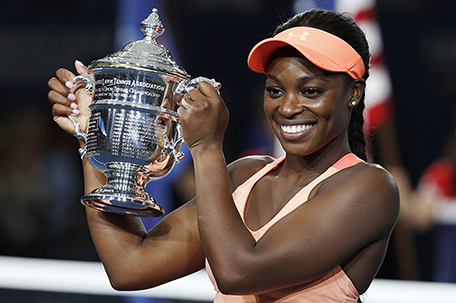 NEW YORK — Sloane Stephens never looked shaken by the setting or the stakes in her first Grand Slam final. Her opponent, Madison Keys, most definitely did.

Stephens easily beat her close friend Keys 6-3, 6-0 to win the U.S. Open on Saturday, capping a remarkably rapid rise after sitting out 11 months because of foot surgery.

“I should just retire now,” Stephens joked. “I told Maddie I’m never going to be able to top this. I mean, talk about a comeback.”

The 83rd-ranked Stephens, who beat Venus Williams in the semifinals, is only the second unseeded woman to win the tournament in the Open era, which began in 1968.

A year ago, she sat out the U.S. Open altogether because of what turned out to be a stress fracture in her left foot. She had an operation in January, and made her season debut at Wimbledon in July, exiting in the first round. Lost her next match, too, in Washington.

Since then, she has gone 15-2, and her ranking has soared from outside the top 900 to what will be around No. 20 as of Monday. Oh, and, don’t forget: She is now, and forever will be, a Grand Slam champion.

“I mean, things just have to come together,” Stephens said, “and the last six weeks, five weeks, they really have.”

This was only the second time in the Open era that two women were making their Grand Slam final debuts against each other in New York. Stephens most certainly handled the occasion better, claiming the last eight games and making only six unforced errors — Keys had 30 — in the entire 61-minute mismatch.

Keys, 22, and Stephens, 24, have known each other for years. They texted and spoke on the phone early in 2017, when both sat out the Australian Open because of operations — Keys on her left wrist, Stephens on her left foot.

When the match ended, they met at the net for a long hug . While waiting for the trophy ceremony to begin, Stephens walked over and plopped herself down in a courtside chair next to Keys, so they could chat side-by-side.

“Sloane is truly one of my favorite people and to get to play her was really special. Obviously I didn’t play my best tennis today and was disappointed,” Keys said. “But Sloane, being the great friend that she is, was very supportive. And if there’s someone I have to lose to today, I’m glad it’s her.”

They hammed it up afterward, too. When Stephens was presented with her $3.7 million winner’s check, she grabbed Keys’ arm, as if to stop herself from fainting at the sum.

“That’s a lot of money!” Stephens said. Keys eyed the check and teased, “I’ll hold it for her.”

There hadn’t been an all-American women’s final at Flushing Meadows since 2002, when Serena Williams beat her older sister Venus.

Under a clear blue sky, in unseasonably cool conditions in the 60s, the 15th-seeded Keys came out pounding her serves, as usual, producing two aces in her opening game and cranking up the speed to 118 mph in her second. But that didn’t last long.

By Keys’ third service game, Stephens was returning with confidence. It was Keys who blinked first, providing four groundstroke errors to gift the first break and trail 3-2 after 12 minutes. Those miscues just kept on coming, as she repeatedly dumped what should have been routine shots into the net or sprayed them long, the sort of thing that can be a sign of nerves.

Her body language was of someone who was rattled.

She looked up at her coach, former No. 1 Lindsay Davenport, in the guest box at Arthur Ashe Stadium, as if hoping for some sort of guidance. She sat in her changeover chair and buried her face in a white towel. After getting broken to trail 4-0 in the second set, the sixth game in a row that went to Stephens, Keys took an angry slap at a tennis ball.

With so much help from the other side of the net, Stephens did not need to be spectacular, just solid, and that she was. She made only two unforced errors in the entire first set — 15 fewer than Keys — and only two of Stephens’ 30 points in the first set came via her own clean winners.

Stephens won 16 of 20 points she served in the first set and didn’t face a single break point until 50 minutes into the final, deep in the second set. She had to deal with three in one game there, erased each with a winner, and held for 5-0. Soon enough it was over.