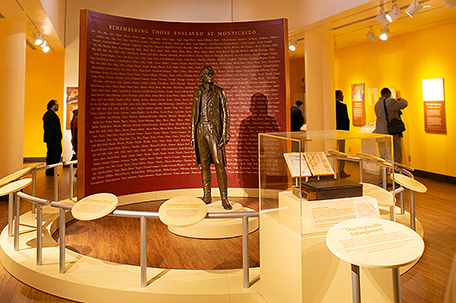 ABOVE PHOTO: Thomas Jefferson statue with names of the individuals he owned as slaves listed behind him, the lap desk where he wrote a draft of the Declaration of Independence and the farm ledger he kept with the names and descriptions of the people he owned.  (Photo by The Mamones)

“Even boys 10 to 16 years old felt the whip. There was no such thing as a good slave owner.

DALLAS — Gayle Jessup White strolled through a poignant exhibit about slavery while processing a complex past: Many of her ancestors – men, women and children – were enslaved by Thomas Jefferson.

Jessup White, who says she is a descendent of Thomas Jefferson and Sally Hemings, the enslaved women who had six children by Jefferson, helped bring the exhibition, “Slavery at Jefferson’s Monticello: Paradox of Liberty,” to Dallas. 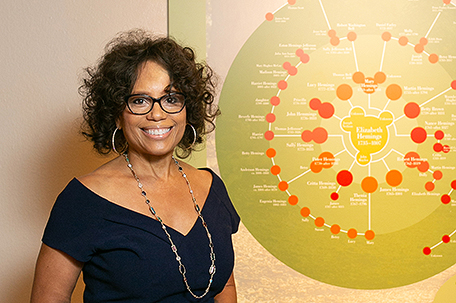 “This is a story about my family,” said White, who is the community engagement officer at Thomas Jefferson’s Virginia home, Monticello. “This exhibit humanizes people. You will see tools that were used by enslaved people, people who were cast aside, people who were left behind, but these people were the backbone of America.” 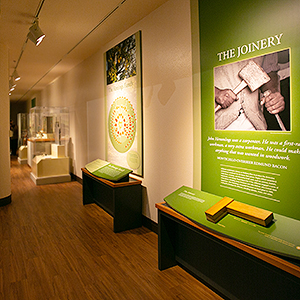 The exhibition tells the story of slavery at Monticello, Jefferson’s 5,000-acre Virginia plantation from the perspective of six families who were enslaved there for more than 80 years.

White notes the irony that we know so much about them because Jefferson, the primary author of The Declaration of Independence, “took such copious notes” on his land and slaves.

More than 300 artifacts, works of art and documents representing Jefferson’s Monticello, will be on display at the African American Museum in Dallas until Dec. 31. 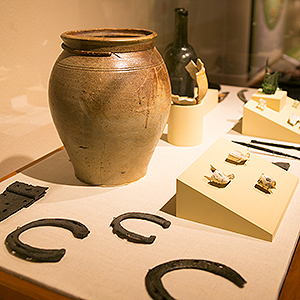 The exhibit, which premiered at Smithsonian’s National Museum of American History, breaks new ground by focusing in more detail on the life of Sally Hemings, who was enslaved with an estimated 400 men, women and children who labored on Jefferson’s plantation.

Some of Jefferson’s items on display include a finely carved chess set, his eyeglasses and bookstand.

There’s also a medicine bottle from Paris that may have been brought back by Sally Hemings during her time in France with Jefferson; a portion of a black pot (Jefferson encouraged his slaves to marry and gave them a black pot as a wedding gift) and an arm chair used in the house that is believed to have been made by John Hemings, a gifted furniture maker.

Until this exhibit, some of the artifacts had never left Monticello. 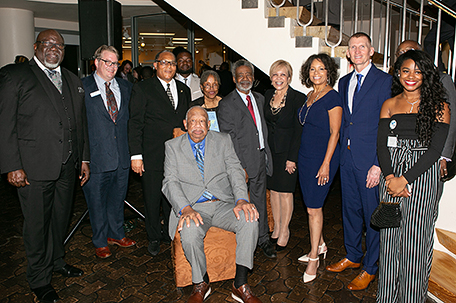 After Dallas, the show will travel to other cities including Detroit and Richmond.

The exhibit features a special display about Hemings, one of the most famous African American women in American history. Jefferson fathered at least six children with Hemings, White said.

“We’ve given back to Sally Hemings her humanity,” she said. “We want visitors to understand Sally Hemings as a person through her family roles as a mother, daughter and sister. We’re not just talking about Thomas Jefferson and his family, we’re telling powerful stories about the enslaved people and their families, too.”

This exhibit is especially personal for White because she is a descendent of Sally Hemings’ brother Peter Hemings and one of Thomas Jefferson’s great-great grandsons, Moncure Robinson Taylor.

Bishop T.D. Jakes, pastor of The Potter’s House and an honorary co-chair of the Dallas exhibit, said Jefferson was a deeply conflicted man. 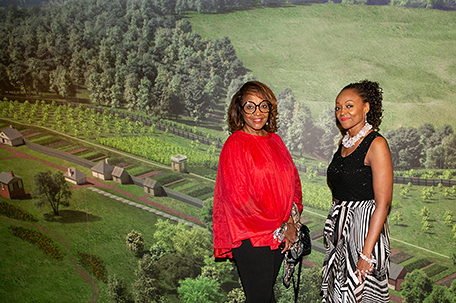 Reception guests (Photo by The Mamones)

“You know, it’s interesting, as I was walking around museum, reading some of the quotes that were attributed to Jefferson, the conflict that he had while being an advocate for emancipation on one hand, yet he was a slave owner on the other,” Jakes said.

“Dallas is sometimes considered a cultural outpost and when we established this museum, we were trying to fill the void,” Robinson said. “This exhibition will help us bring about discussions of [racial] issues that we have been dodging for some time.”

Meanwhile, White said she wants people of all racial and ethnic backgrounds to tour the exhibit to gain a deeper understanding of Hemings and other enslaved families who lived and worked on Jefferson’s plantation.

“This is an American story because these enslaved people helped shape America,” she said. “This exhibit is a big deal: There is lots to see, lots to take in, and lots to learn.”