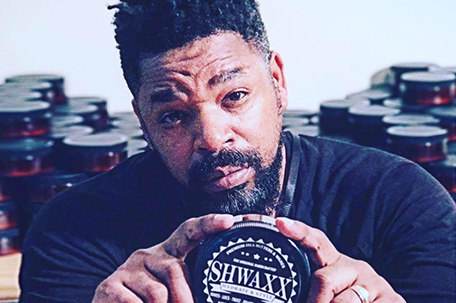 Following another late-night session where he mixed a special blend of natural oils in the kitchen of his Atlanta home, the 49-year-old Rodgers waited expectantly as his wife Lorraine rubbed the creamy pomade into her palms and then her hair.

“I needed her approval,” Rodgers said. “After all that work, it wasn’t done until she said it was.”

She looked him in the eye, smiled and gave her husband the thumbs up.

SHWAXX Hydrate and Style was officially born. The all-natural product Rodgers intended to manage beards was a multipurpose reality. Through his experimentations, Rodgers created a water-soluble pomade that softens, hydrates and conditions all textures of beards and hair, especially coarse, thick hair consistent with many African- Americans.

His product features shea butter, jojoba wax, and other organic ingredients that Rodgers toyed with for years before coming up with the right formula.

“Some would say it was a struggle, but I would say it was a journey,” Rodgers said. “An exhilarating journey.” But Rodgers also knew that developing a great product was only the first step in realizing his dream. His next challenge was to transform himself from a creative inventor to a savvy entrepreneur.

Rodgers enrolled in the StartMe Small Business Accelerator program held at and sponsored by the Emory University’s Goizueta Business School in Atlanta and nonprofit organizations that empower small businesses. 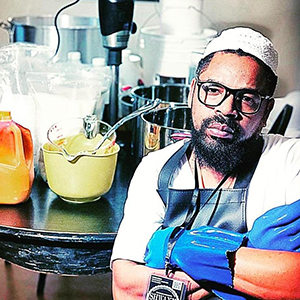 Barber Kevin Rodgers in his lab and with his product SHWAXX.

The 14-week program connects a select group of entrepreneurs to the knowledge, networks and capital needed to build and develop sustainable businesses. While helping Rodgers sharpen his business skills, the program also affirmed that his wife wasn’t the only person who thought the product he crafted was special: he became one of just 24 peer selected ventures to receive startup capital through the program.  When he and SHWAXX were among the recipients of a Growth Seed Investment Grant — over competition he deemed formidable — his emotions ranged from surprised to gratified.

“Validation comes from within,” he said. “Affirmation, however, came through the steps and procedures that my mentors (in the program) tested me on each session. Halfway through the program. . . I stopped looking to win the seed grant, and focused heavily on my business plan, income statement and balance sheet.”

He said he plans to use the $4,000 award to help produce larger quantities of SHWAXX and to expand his marketing platform.

Rodgers attacks his new/old venture with the same passion and work ethic he has applied to other creative works. Those include a short film, “Every Idle Word,” about business, family, loyalty and the struggles within a barbershop which was released to critical acclaim in 2013. It was the visual version of a novel he had written nine years earlier, “The Barber Game.”

He also taught himself guitar and performed under the stage name “Kevo Desh.”

“My wife teases me because I love to create,” Rodgers said. “I create through the arts, whether literary, music, or visual arts. I love to express how I feel, or where I would like to be creatively. So, to me, it is just one thing. There are different disciplines, but it is all expression through the arts.”

Rodgers earns his living as a barber at his own boutique Atlanta shop, The Tilted Crown, replete with two chairs. In developing SHWAXX, Rodgers would end his workday as a barber and begin his evenings in the kitchen of his Atlanta home filing pots with various oils, mixing them to create about 40 pleasant-smelling incarnations over two years, he said. He test-marketed eight of those versions on clients before settling on the blend that earned his wife’s approval.

“Barbering is art and science,” Rodgers said. “I study and practice the science of natural hair, the ingredients that can alter that hair and the results of these experiments. I chose to handcraft new products as an extension of my service as a barber.”

The goal, who attended Norfolk State University with his wife after they met in high school — is for SHWAXX to evolve into a family business with his three women playing various significant roles in the management, production, marketing and selling of the product. “A local business and brand with global reach. Ultimately the SHWAXX brand will be a go-to product for natural hair consumers worldwide,” he said.

Rodgers’s journey is far from reaching that goal. But he continues to receive affirmation every step of the way. As part of his marketing effort, he showcased SHWAXX at the Bronner Bros. International Beauty Show in Atlanta last February – one of the nation’s most prestigious showcases for African-American hairstylists, barbers and makeup artists.

One attendee, Cedric Frazier, owner of Anointed Cuts barbershop in San Antonio, was impressed. “There are all kinds of products being sold and I usually don’t buy any at that event,” Frazier said. “But Kevin said, ‘Just try it.’ I did —and I hit the jackpot.

“It’s all natural and it’s multi-purpose,” Frazier added. “When my clients use it and come to me, I can cut their hair. But if they use traditional hair grease, it’s going to be a long day. I have to shampoo their hair and get that stuff out of it. And with SHWAXX, you can use it on waves, dreadlocks, twists, beards. It hydrates the hair and you can style it at the same time.”

SHWAXX received an even bigger boost through the hit television show, “Atlanta,” which stars Donald Glover. It was placed in a scene in the first episode of the recently completed Season 2 of the Emmy Award-winning FX series.

“Over one million viewers have seen our SHWAXX logo (through the show),” Rodgers said. “Now we’ve got to help them understand what they saw. . . That’s the exciting part.”