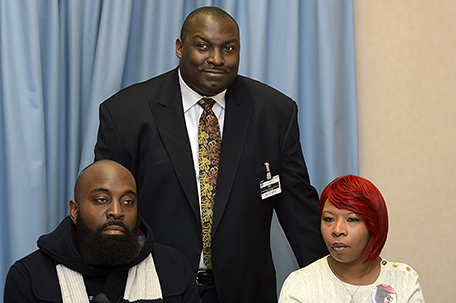 ABOVE PHOTO:  Lesley McSpadden, right, Michael Brown, Sr., left, parents of teenager Michael Brown who was shot by a policeman in Ferguson, Missouri, and attorney Daryl Parks, center, speak during a press conference about the UN Committee Against Torture who convenes this week to evaluate the US government’s compliance with the Convention Against Torture, in Geneva, Switzerland, Wednesday, Nov. 12, 2014. (AP Photo/Keystone, Martial Trezzini)

Michael Brown Sr. and Lesley McSpadden addressed the 53rd Session of the United Nations Committee Against Torture in Geneva on Nov. 12 and 13.  A Saint Louis University law professor helped to organize the trip and to solicit online donations for the couple’s travel expenses.

They said the shooting death of their unarmed son by a white Ferguson police officer, and the way police treated protesters in the days after his killing, violated the U.N.’s anti-torture convention.

“We’re trying to ask for justice for our son,” Brown’s father, Michael Brown Sr., said. “We need Darren Wilson to be accountable for his actions.”

The trip comes as a St. Louis County grand jury prepares to conclude its inquiry into the Aug. 9 shooting death of Brown by Ferguson officer Darren Wilson.

CNN contributed to this report.