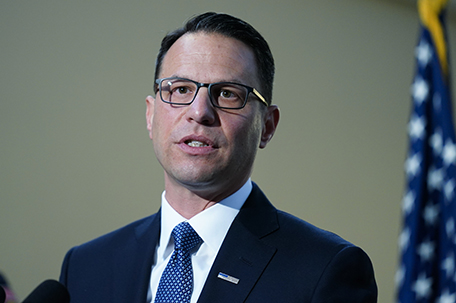 ABOVE PHOTO: Pennsylvania Attorney General Josh Shapiro speaks with members of the media during a news conference, in Philadelphia, Tuesday, March 15, 2022. An ad by Rep. Brian Sims seeking the Democratic nomination for Pennsylvania lieutenant governor this year drew a complaint Friday, April 15, 2022 and a sharply worded letter from Josh Shapiro, the party’s presumed nominee for governor.(AP Photo/Matt Rourke, File)

HARRISBURG, Pa. — An ad by one of three people seeking the Democratic nomination for Pennsylvania lieutenant governor this year drew a complaint Friday and a sharply worded letter from the party’s presumed nominee for governor.

Shapiro took the unusual step earlier this year of endorsing and running with state Rep. Austin Davis of Allegheny County, even though in Pennsylvania candidates for governor and lieutenant governor are not paired on the primary ballot.

So, when the Shapiro camp noticed “ENDORSED JOSH SHAPIRO,” along with a check-marked ribbon, appeared at the end of Sims’ new statewide ad, lawyers fired off a cease-and-desist order.

“Not only does the ad mislead voters, it also places Attorney General Shapiro in a false light,” argued Courtney Weisman, a lawyer for Shapiro, in the letter sent Friday. She said Sims’ wording was designed to mislead Pennsylvanians.

The ad began running on streaming services in markets around Pennsylvania this week, Sims’ spokesperson said.

The Shapiro team had asked Sims to endorse Shapiro before the campaign began, Sims’ campaign said in a statement to The Associated Press. Shapiro is the only candidate for governor in the Democratic primary this year.

It said Shapiro’s campaign has included Sims’ backing in a public list of endorsements, but a Shapiro campaign spokesperson said he was unaware of any public use of Sims’ endorsement.

Because they run separately in the primary but as a ticket in the fall, governors and lieutenant governors can essentially end up in a forced relationship. Some have worked together productively but others have struggled.

The current governor, Democrat Tom Wolf, was elected with former state Sen. Mike Stack of Philadelphia in 2014. By spring 2016, Wolf had responded to complaints about Stack’s treatment of state employees by stripping him of state police protection and limiting cleaning, grounds keeping and maintenance by state employees at Stack’s official residence.

Stack’s office later said his wife had entered treatment for an undisclosed mental health issue, and Stack lost a multicandidate primary in 2018 to the current lieutenant governor, John Fetterman.

Along with Sims and Davis, the other Democrat seeking the job this year is Raymond Sosa, a financial planner who also ran for it in 2018.