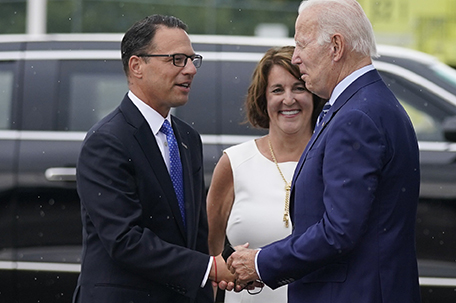 ABOVE PHOTO: President Joe Biden greets Pennsylvania candidate for governor, state Attorney General Josh Shapiro, left, and Terese Casey, wife of Sen. Bob Casey, D-Pa., as he arrives at Wilkes-Barre Scranton International airport, Aug. 30, 2022, in Avoca, Pa. In Pennsylvania, Democratic candidate for governor, Shapiro, argues that his focus on public safety, education, the economy and freedom is driving his momentum, he concedes that the quality of his opponent is also a major factor. (AP Photo/Evan Vucci, File)

Now, as he’s running to succeed Wolf as governor, Shapiro says he is against some of the same COVID-19 containment measures that his fellow Democrat used to help manage the nation’s worst pandemic in over a century.

On the campaign trail in the presidential battleground state, Shapiro’s Republican opponent, Doug Mastriano, makes Wolf’s COVID-19 policies — and Shapiro’s defense of them in court — a source of derision.

But disavowing Wolf’s COVID-19 policies while facing headwinds for his party may be a politically painless way for Shapiro to tack to the middle against Mastriano, who even some top Republicans say is too far to the right to win the November general election.

“This is an area where I think folks got it wrong,” Shapiro said of school and business shutdowns. On mask and vaccine mandates, Shapiro said he opposed them and instead talked about a need to “educate and empower” the public, business owners, school leaders and others to protect themselves and others.

“And to me, that’s the approach we need to take more broadly as a public, which is to educate, empower and respect people’s personal decisions and respect their personal freedom to make those choices,” Shapiro told The Associated Press in an interview.

It is unusual, if not unprecedented, for a Democrat to go against some of the core measures that Democratic governors — and some Republican governors — used to contain COVID-19.

And Shapiro is doing it as incumbent Democratic governors in other presidential battleground states, such as Wisconsin Gov. Tony Evers and Michigan Gov. Gretchen Whitmer, are defending their records as they run for reelection this year.

It follows Republican Glenn Youngkin’s victory last year in the Virginia governor’s race as he differentiated himself from his Democratic opponent by pledging to end vaccine and mask mandates and vowing to keep schools open.

Shapiro, the state’s two-term elected attorney general, is also running against decades of precedent: If he wins, he would be the first governor to succeed a two-term governor of the same party in Pennsylvania.

Since the pandemic began, Wolf has battled Pennsylvania’s Republican-controlled Legislature over his orders requiring masks and shutdowns of schools and businesses during the COVID-19 pandemic, which has killed more than 46,000 people in Pennsylvania.

Wolf also ordered about 25,000 employees of Pennsylvania’s prisons and care facilities to get vaccinated or take weekly tests for the virus. President Joe Biden ordered farther-reaching vaccine mandates, including one on private companies blocked by the U.S. Supreme Court. Shapiro said that, as attorney general, his office is required to defend the state in court, and it did so numerous times in state and federal court during the pandemic.

In one filing in 2020, Shapiro’s office wrote that a federal judge’s decision to block Wolf’s orders shutting down non-life-sustaining businesses and putting size limits on gatherings “will undoubtedly cost lives.”

In another last fall, the office argued that Wolf’s school mask mandate was necessary “to protect the health and lives of Pennsylvania’s school children and their families, and to prevent schools in the Commonwealth from becoming COVID-19 super-spreader sites.”

A mainstay of Mastriano’s stump speeches is castigating Shapiro’s defense of Wolf’s policies and arguing that a Shapiro governorship would be the equivalent of a third term for Wolf.

At a rally in Lancaster last Wednesday, Mastriano cast the November election as a choice between “tyranny and freedom” and said he was appalled that anyone would abide by the mantra “Stay home, stay calm and stay safe.”

Shapiro said that he didn’t require vaccines or masks in his offices, although he said that he tried to educate his workforce and foster an understanding culture.

He himself appeared careful about mask-wearing in public during the pandemic and said he tried to make an example of himself by getting the vaccine to encourage others to do so.

Mastriano, a retired Army colonel who became a state senator in 2019, has opposed COVID-19 restrictions since the early weeks of the pandemic, leading anti-shutdown rallies, belittling masking and other containment measures and spreading misinformation online about the vaccine, which studies have shown is safe and effective.

Wolf’s office has called Mastriano a “science denier” who “put lives in danger throughout the pandemic by openly downplaying the crisis and opposing vaccines and other mitigation efforts.”

COVID-19 policies aren’t the first time Shapiro has broken with Wolf. Since he announced that he was running for governor, Shapiro has opposed Wolf’s key climate change and transportation funding pursuits.

Last year, for instance, Shapiro came out in opposition to the centerpiece of Wolf’s plan to fight climate change — charging power plants for planet-warming greenhouse gas emissions — amid the strong and sustained pushback it received from building trades unions and the business sector.

Shapiro has said he worries that Wolf’s plan will hurt the state’s energy industry, drive up electric prices and do little to curtail greenhouse gases.

The plan is currently held up in court, but it rates prominently in stump speeches by Mastriano, who says he’d put a stop to it on his first day in office.

AP-NORC polls in 2021 and earlier this year have shown more approval than disapproval among U.S. adults for various kinds of mask mandates or vaccine mandates, but it also shows that concern over getting infected has fallen over time as treatments improve and more people get vaccinated.

Shapiro is not completely distancing himself from Wolf and Biden. He appeared recently with Wolf at a news conference on abortion rights and recently appeared with Biden. But a little distance may be helpful if the midterm elections end up being a referendum on the party in power.

“Let’s face it, this would be a very rare thing to have a third term for the same party, so that and the fact that the general election this time around looks to be favorable to Republicans, I don’t think it hurts to create distance from a Democratic officeholder,” said Berwood Yost, a pollster and director of the Center for Opinion Research at Franklin & Marshall College.