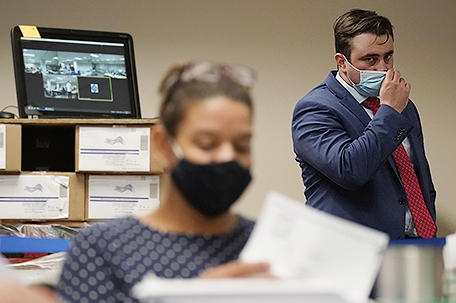 HARRISBURG, Pa. — Pennsylvania’s Republican-controlled Senate approved a bill Monday that orders a number of changes to state laws over partisan election observers in polling places and election offices, a throwback to complaints in 2020 by former President Donald Trump that the Democratic bastion of Philadelphia needed to be watched closely for election fraud.

Pennsylvania, like other battleground states where Trump lost, is still roiled by Trump’s baseless claims that 2020’s presidential election was stolen from him. It has helped drive a wider partisan stalemate in election-related legislation in Pennsylvania’s statehouse.

The bill passed, 30-19, with every Republican and one Democrat backing it.

The sponsor, state Sen. Doug Mastriano, the Republican nominee for governor who has spread baseless claims about election fraud, said the bill would “restore trust and integrity in elections.”

However, the office of Gov. Tom Wolf, a Democrat, said in a statement that the administration strongly opposes the bill and that it “does nothing to increase access to voting.”

One provision in the bill would remove the county residency requirement in state law for certified poll watchers, freeing them to come from anywhere in the state.

Trump had pushed for such a change in 2020, failing in court. Wolf has threatened to veto such Republican legislation previously, with Democrats calling it a voter intimidation tactic.

The bill also would raise the number of partisan poll watchers allowed into each polling place during voting and give them access to “any facility where votes are collected.”

The campaign sued and lost in court, with judges saying Pennsylvania law did not allow partisan representatives to observe in election offices.

Another provision in the bill would require partisans who are certified to watch election workers processing mail-in or absentee ballots to “have a clear line of sight to view and hear the proceedings at a distance of six feet or less.”

The Trump campaign had sued — and lost — in state and federal courts over its complaints that its observers were not allowed close enough to scrutinize mail-in ballots as they were being processed in heavily Democratic Philadelphia and Allegheny County, which is home to Pittsburgh.