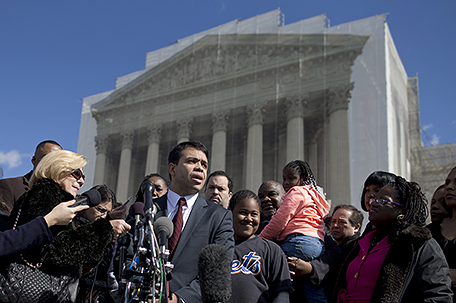 WASHINGTON — Should a lawyer be disqualified from public service for representing a client like a cop killer? The question arises after the Senate rejected President Barack Obama’s candidate to be the government’s chief civil rights attorney.

The White House, attorneys and civil rights groups argued that a bipartisan vote Wednesday blocking Debo Adegbile from advancing toward confirmation set a troubling precedent that could dissuade lawyers with aspirations to serve in government from taking on unpopular clients or working for unpopular causes.

“The fact that his nomination was defeated solely based on his legal representation of a defendant runs contrary to a fundamental principle of our system of justice,” Obama, a lawyer himself, argued after the final vote.

Adegbile spent much of his career at the NAACP Legal Defense and Educational Fund, where he argued before the Supreme Court that Mumia Abu-Jamal’s conviction for killing a Philadelphia police officer should be overturned because of discrimination in jury selection. Abu-Jamal is now serving a life sentence without parole.

The National Fraternal Order of Police urged senators to oppose Adegbile for his advocacy in the case. All 44 Republicans and eight Democrats voted against his nomination as head of the Justice Department’s Civil Rights Division, likely dooming the nomination in what Obama called a “travesty based on wildly unfair character attacks.” It was unknown what the next steps the White House will take with the nomination

Democratic Sen. Chris Coons of Delaware, a lawyer, voted no because Adegbile “would face such visceral opposition from law enforcement on his first day on the job.” But Coons also said he embraces “the proposition that an attorney is not responsible for the actions of their client.”

Hans von Spakovsky, senior legal fellow at the conservative Heritage Foundation think tank, said senators had a right to probe Adegbile’s work because it was for an advocacy group.

“They tried to bring racial politics into this murder of a police officer, and not only that, they used it to try to try to make the false claim that we have an entirely racist judicial system and they used it to raise money,” he said. “I don’t know of any private attorneys who use their representation of clients to try and raise money for their organization. It is very much on point to be able to criticize him for the kind of representation they provided.”

“During the course of their long careers, both John Roberts and Debo Adegbile each performed a vital constitutional service by representing an unpopular client on death row,” said Wade Henderson, president and CEO of The Leadership Conference on Civil and Human Rights. “Roberts is now chief justice of the Supreme Court, but opponents of the Adegbile nomination twisted reality and resorted to some of the dirtiest attacks I’ve seen in my professional career.”

Obama’s counsel, Kathryn Ruemmler, said rising young lawyers who have taken on unpopular clients were watching the Adegbile vote and thinking they will never be able to serve at a senior level in the government.

“It’s a horrible message to send that is degrading to our whole system of justice, which relies on having skilled advocates on both sides of the case,” Ruemmler said. “Our system is premised on that fundamental bedrock principle. It works best when both the prosecution and defense are represented by highly competent people.”

Russell Wheeler, a Brookings Institution visiting fellow who is an expert on Senate judicial nominations, said holding lawyers’ clients against them only leads to less qualified nominees and a poorer legal system.

The American Bar Association has argued to senators that using lawyers’ clients against them is out of bounds.

“Although lawyers work for their clients, their representation does not mean that they endorse their client’s views or actions,” ABA President James R. Silkenat said Wednesday. “Any lawyer who stands in defense of the accused should be commended for the services they render in accordance with our nation’s founding principles.”