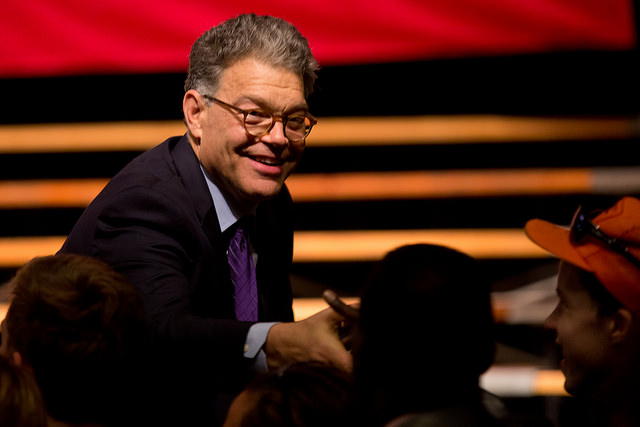 Franken’s support in the Senate crumbled after another woman emerged saying he forcibly tried to kiss her in 2006, bringing to seven the number of women accusing him of sexual impropriety. More than a half dozen female Democratic senators and some men called on him to resign.

“I’m shocked and appalled by Sen. Franken’s behavior,” said Sen. Patty Murray, D-Wash. “It’s clear to me that this has been a deeply harmful, persistent problem and a clear pattern over a long period of time. It’s time for him to step aside.”

“Obviously, there were new allegations, and enough is enough,” Sen. Kirsten Gillibrand, D-N.Y., told reporters. “We need to draw a line in the sand and say none of it is OK, none of it is acceptable and we, as elected leaders, should absolutely be held to a higher standard.”

Minority Leader Chuck Schumer, D-N.Y., did not immediately comment, but Minority Whip Dick Durbin, D-Ill., was among those calling for Franken to step aside.

The demands came in rapid succession after Franken on Wednesday vehemently denied a new sexual misconduct accusation that came from a former Democratic congressional aide, who said he tried to forcibly kiss her after a taping of his radio show in 2006.

The woman, who was not identified, told Politico that Franken pursued her after her boss had left and she was collecting her belongings. She said she ducked to avoid his lips, and that Franken told her: “It’s my right as an entertainer.”

Franken, in a statement, said the idea he would claim such conduct as a right as an entertainer was “preposterous.”