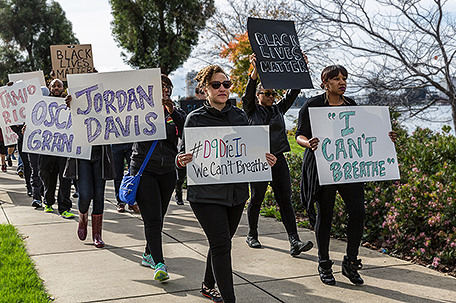 BERKELEY, Calif.  — Raucous demonstrations hit Berkeley’s streets for a second straight night as protesters angered by police killings in Missouri and New York clashed with officers, vandalized businesses and even fought with each other, officials said.

Sunday’s protest began peacefully on the University of California, Berkeley, campus but eventually grew rowdy and spilled into Oakland. Activists made their way onto a freeway and blocked traffic.

The California Highway Patrol said officers fired tear gas after protesters targeted them with rocks and bottles and tried to light a patrol vehicle on fire. Police also said explosives were thrown at officers, but there was no information immediately available on how potent they were.

Officers chased protesters off the roadway.

The demonstrations were the latest of several in the Bay Area — including in Oakland where activism is strong — to protest recent grand jury decisions in Missouri and New York not to indict while police officers in the deaths of two black men.

As hundreds of protesters began marching through downtown Berkeley, the unrest that marked protests Saturday night was touched off again as someone smashed the window of a Radio Shack. When a protester tried to stop growing vandalism, he was hit with a hammer, Officer Jennifer Coats said.

Police said groups of protesters late Sunday began roaming through the downtown area, throwing trash cans into streets and lighting garbage on fire, smashing windows on buildings, and damaging and looting businesses. There also were reports of vandalism at City Hall.

Coats said in a statement that there was “significant damage” to several Berkeley businesses and that many had windows smashed and several stores were looted.

She said the demonstrations had concluded by about 3:30 a.m.

The San Francisco Chronicle said that at about midnight, there were still a few hundred people on the streets. At one point, the Radio Shack on Shattuck at Dwight Way was ransacked. Later, a Whole Foods store on Telegraph was looted, with people taking and passing around bottles of champagne.

There was no immediate word of any serious injuries. During the protests a day earlier, three police officers and a technician were hurt and six people were arrested when the protest turned unruly.

Meanwhile, seven people were arrested in Seattle Saturday night after protesters threw rocks at police and attempted to block a highway. Politicians on both sides of the aisle have been calling for calm while activists push for police reforms. NAACP president Cornell William Brooks, appearing on CBS’ “Face the Nation,” called for outfitting police with body-worn cameras and changing law enforcement policy.

“We have to change the model of policing,” Brooks said.

Ohio’s Republican governor said the unrest underscores the need for political leaders to be inclusive and to unite, not divide.

Ohio Gov. John Kasich said on ABC’s “This Week” that a “significant percentage” of the country believes the system’s not working for them and can be working against them.

“They need to be listened to and they need to be responded to,” Kasich said. “In our country today, there’s too much division, too much polarization — black, white; rich, poor; Democrat, Republican. America does best when we’re united.”

But the protest Saturday was the most serious for Berkeley. Then, protesters broke away from a peaceful demonstration and began throwing rocks, bottles and pipes at officers, who brought in scores of reinforcements from area departments. Police responded with tear gas.

Coats said several businesses were vandalized and demonstrators threw wrenches, smoke grenades and other objects at officers, and some squad cars were damaged.

Local media reports said about 300 to 400 people participated in the relatively peaceful demonstration before splinter groups broke off.