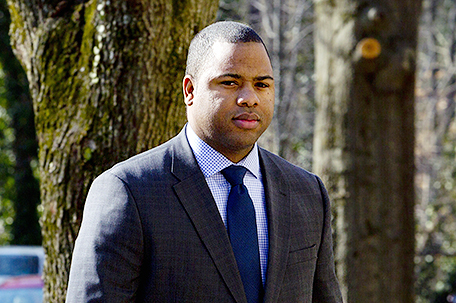 ABOVE PHOTO:  Officer William Porter, one of six Baltimore city police officers charged in the death of Freddie Gray, arrives to Maryland Court of Appeals, Thursday, March 3, 2016, in Annapolis, Md. Maryland’s highest court will hear arguments Thursday on whether Porter can be compelled to testify against his colleagues after his trial ended in a hung jury in November.  (AP Photo/Jose Luis Magana)

BALTIMORE — The second trial for a police officer charged in the death of Freddie Gray is set for next month – a year after the black man’s neck was broken in a police van – and one of the officer’s colleagues will be forced to testify.

The latest reshuffling of trial dates happened Tuesday when Maryland’s highest court ruled that Officer William Porter must testify against his fellow officers while he awaits retrial. Porter’s trial ended in a hung jury in December and proceedings for the other officers have essentially been on hold while the courts determined whether he should be forced to take the stand.

The trial for Lt. Brian Rice, the highest-ranking officer charged in the Gray case, will start April 13 – one year and one day after Gray was arrested outside the Gilmor Homes in Baltimore’s Sandtown-Winchester neighborhood when he ran from police.

Gray was booked after Rice and officers Edward Nero and Garrett Miller found a knife they deemed illegal in Gray’s pocket. The state’s attorney has said the knife was legal and Gray should have never been taken into custody. He died a week after his injury in the van.

Rice is charged with manslaughter, misconduct in office, reckless endangerment and assault. All of the officers have pleaded not guilty.

Porter, who checked on Gray after he was put in the van, testified at his trial that he didn’t do anything wrong during Gray’s arrest. He told a jury that it was the van driver’s responsibility to make sure Gray was secured in a seat belt.

Porter’s attorneys argued he shouldn’t be forced to take the stand at the other trials because he could potentially open himself up to perjury. The Maryland Court of Appeals judges seemed skeptical during oral arguments last week, saying Porter shouldn’t have anything to worry about as long as he tells the truth.

The judges did not explain their decision Tuesday, saying they would issue an opinion later.

Amy Dillard, a law professor at the University of Baltimore, said their ruling makes sense.

“What the prosecution is asking for is that Porter be called and asked the same questions and testify as he did before under oath,” Dillard said. “If the prosecutor goes into areas he has not commented on or testified about, there are motions to be made during those trials.”

A second order reversed Williams’ decision that Porter did not have to testify against officers Miller, Nero and Rice.