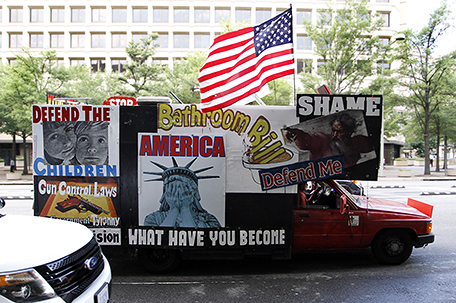 ABOVE PHOTO:  A vehicle with the American flag hanging on the roof by the Department of Justice building during a protest about police brutality, Friday, July 8, 2016, in Washington. In the span of four days, the United States has had to come to terms with the deaths of two black men at the hands of police — the first caught on video and the aftermath of the second livestreamed on Facebook — as well as the deadliest day for U.S. law enforcement since 9/11. (AP Photo/Paul Holston)

“Protesters are complaining about the police and the police are complaining about protesters, but very few people have offered any solutions,” Steele explained in an interview. “We are beginning a solutions-oriented Neighborhood Patrol Initiative that will rely on the leadership and experience of former police officers and military veterans to return stability to our neighborhoods.”

He said a pilot program will begin soon in Atlanta and will be duplicated in other cities after the model has been perfected.

“It’s important that Black men in particular who have had experience fighting, both at home and abroad, take the lead in restoring peace and stability in our communities. In addition to conducting regular around-the-clock patrols– with the help of men who have not been part of law enforcement and the military– we want these community patrols to videotape all suspicious activities in their neighborhoods. We have already seen the power of videotapes and social media in recent national events surrounding the deaths of Alton Sterling in Baton Rouge, La. and Philando Castile in Falcon Heights, Minn.,” Steele said.

A fact sheet created by SCLC, stated: “According to the FBI, most crimes in the United States are intra-racial, not interracial. In fact, FBI stats for 2014, the latest year available, show that 7.6 percent of Blacks are killed by Whites and 90 percent of African Americans are killed by other African Americans. The FBI also reported that 82.4 percent of Whites are killed by other Whites. So we can’t pretend that we’re serious about crime in our community until we deal with Blacks killing other Blacks. At the same time, Whites should stop pointing fingers at Blacks and deal with the equally serious White-on-White crime.”

It continued, “Why Deal with Blue-on-Black Crime? We must address the issue of men and women in blue killing because Black and Brown people bear the brunt of killings by police. A database of police killings compiled by the Washington Post shows that African Americans are 2.5 times as likely as White Americans to be shot and killed by police officers.”

The Neighborhood Patrol Initiative will be directed by retired St. Louis Police Capt. Charles L. Alphin, Sr. Although the neighborhood patrols will not be armed, in keeping with SCLC nonviolent principles, members will be equipped with walkie-talkies or other forms of communication, Steele said.

He also said SCLC is looking closely at incorporating into its Neighborhood Patrol Initiative ACLU-operated program in the District of Columbia and 8 states, whereby people videotaping confrontations with police on their cell phones can have that videotape immediately sent to the ACLU for preservation, even if the phone is destroyed after a recording is made. It’s part of a mobile justice app that can be downloaded for free on iOS and Android devices. The app is currently available in California, North Carolina, Oregon, Georgia, New Jersey, Pennsylvania, Colorado, Maryland and the District of Columbia.

LaFayette, Steele and Alphin have traveled all over the world teaching what they call “Kingian nonviolence.” Now, they hope to apply that experience back home.

A study of Black homicides by the Violence Policy Institute in Washington, D.C. found that Blacks represent 13 percent of the nation’s population, yet accounted for 50 percent of all homicide victims. For homicides in which a relationship could be identified, 83 percent of victims were killed by someone they knew, the study said. It added, “Of these, 51 percent (1,284 homicides) involved arguments between the victim and the offender.”

To SCLC, that underscores the need to teach non-violent conflict resolution.

“The combination of addressing the Black-on-Black and Blue-on-Black violence along with implementing long-term strategies to neutralize personal conflict before it escalates into violence can have a profound effect on our communities,” LaFayette and Steele said in a joint statement. “This is a time of crisis for many of our communities, but it’s also an opportunity to do something constructive to improve the lives of African Americans and our law enforcement officials.”

SCLC board members call for officials to step down