Schools still struggling with how to teach about slavery 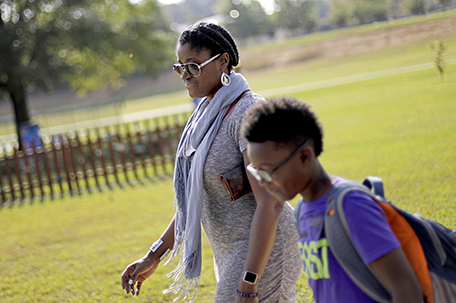 ABOVE PHOTO: Corrie Davis, left, picks up her son Turner from Big Shanty Elementary School in Kennesaw, Ga. The previous month, the school invited fifth-graders to dress up as characters from the Civil War. Davis says a white student dressed as a plantation owner approached her son and said “You are my slave.” She requested that the school to stop the annual Civil War dress-up day. Recently, an investigation by New York Attorney General Letitia James found in May that a mock “slave auction” that singled out black students at the private Chapel School in Westchester County had a profoundly negative effect on all involved students. (AP Photo/David Goldman, File)

“They made me a slave today.”

Aneka Burton still remembers the way her then 10-year-old son, Nikko, who is Black, recounted his experience to his grandfather after school one day.

It was 2011. But Burton believes the classroom exercise in which Nikko’s classmates were encouraged to examine and pretend to bid on each other during a history lesson continues to affect his life, even now as an 18-year-old high school graduate.

“He tries to act like it didn’t bother him, but I really think it changed him,” the Gahanna, Ohio, mother said.

It’s those memories that leave her shaking her head years later as reports about mock slave auctions continue to emerge, reminders that schools are still struggling with how to teach about slavery and its impacts.

There are no national standards on how to teach about slavery, although it is often recommended as a topic in curriculum at the state and local levels, according to Lawrence Paska, executive director of the National Council for the Social Studies. The guidance leaves specific lessons up to schools and teachers, who on several occasions have caused offense with attempts to bring history to life.

An investigation by New York Attorney General Letitia James found in May that a mock “slave auction” that singled out Black students at the private Chapel School in Westchester County had a profoundly negative effect on all involved students.

“Lessons designed to separate children on the basis of race have no place in New York classrooms, or in classrooms throughout this country,” James said.

Other recent examples include an “Escaping Slavery” game that gave North Carolina fourth-graders a freedom punch card that read: “If your group runs into trouble four times, you will be severely punished and sent back to the plantation to work as a slave.” Families also criticized a Virginia obstacle course intended to replicate the underground railroad, navigated by third-, fourth- and fifth-graders pretending to be runaway slaves.

“Teaching about slavery is hard,” summarized a 2018 report from the Southern Poverty Law Center, which surveyed more than 1,700 social studies teachers and analyzed textbooks. “No national consensus exists on how to teach about slavery, and there is little leadership. … It is time to change this state of affairs.”

Dozens of teachers surveyed reported simulations as their favorite lessons when teaching about slavery, according to the report, though its authors and others said such re-enactments do more harm than good.

At the Chapel School, the fifth-grade teacher who led the mock auction in March was fired. The school agreed to hire a diversity officer and change its discipline practices after parents complained that black students were lined up against a wall wearing imaginary shackles and “sold” to their white peers.

Nicole Dayes complained about a similar exercise in her son’s fourth-grade class in upstate New York’s Watertown City School District in May after he described it to her.

“His whole demeanor changed,” Dayes said. “It was kind of somber and uncomfortable … It took me a while to really comprehend what he was saying to me.”

The district said in a statement the teacher had been placed on administrative leave. Superintendent Patricia LaBarr said the district has since sought expert guidance on diversity, inclusion and equity as it reviews its policies and programs.

New York’s social studies curriculum is typical in that it outlines grade-level concepts — fourth-grade students “will examine life as a slave in New York state,” for example — but does not provide specific lessons.

Ill-conceived lessons happen enough that advocates like Teaching Tolerance, a project of the Southern Poverty Law Center, offer lesson plans with suggestions for texts and discussion. Teaching Tolerance plans to publish a framework for teaching about slavery in grades kindergarten through five in August.

“It’s never OK to recreate painful oppressive events, even in the name of education,” said Mara Sapon-Shevin, a professor of inclusive education at Syracuse University, who said teachers risk harming their students’ sense of belonging, safety and inclusion. “One would never simulate an Indian massacre or having Jews march into the ovens.”

“Often it’s done because it’s kind of traditional, maybe they had it when they were in school or they’ve heard about another teacher who did it and they think this is a great idea: It gets the kids out of their seats, they’ll be active,” Costello said.

In one example, a 10-year-old black child was told by a white student, “You are my slave,” in 2017 when a school near Kennesaw Mountain in Georgia invited fifth-graders to dress up as characters from the Civil War, according to the black child’s parent, Corrie Davis.

For generations, teachers have wrestled with lessons on discrimination, perhaps none more famously than Jane Elliott , who led a “blue eyes-brown eyes” exercise in her Riceville, Iowa, classroom in response to the assassination of Martin Luther King Jr. in 1968.

Elliott separated her third-grade class of white students by eye color and unapologetically treated one group as superior, calling them smarter and rewarding them with extra recess and other perks while demeaning the other group. She flipped the roles the following school day.

She said in an interview she has been through the same backlash as the New York teachers, and she stands by her exercise, which she credits with boosting students’ academic performance.

“Every student in my classroom who went through that exercise performed at a higher level academically than they ever had before because they found out the day they were on the top in that exercise how really smart they were,” she said.

Aneka Burton, whose son did not want to be interviewed, said she eventually pulled Nikko out of the school district, when it seemed he was being singled out for discipline and passed over for sports, and she was flooded with hate mail for making the issue public. The experience drastically altered his school experience, she said.

The school principal called to apologize.

“They were able to touch and feel on the slaves. It was really crazy,” she said. “Why would you think that’s OK to do to a child?”

Indianapolis’ Oaks schools use student diversity to teach and learn