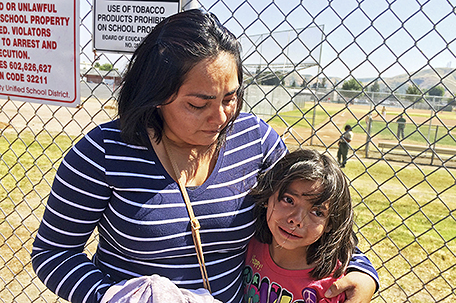 ABOVE PHOTO:  Elizabeth Barajas hugs her daughter, Marissa Perez, 9, following their reunion as Marissa recounted her experiences being in the classroom in which her teacher was shot to death at North Park Elementary School in San Bernardino, Calif., Monday, April 10, 2017.  (AP Photo/Christopher Weber)

By Christopher Weber and Michael Balsamo

SAN BERNARDINO, Calif.  — Students dove under desks when a man walked into his estranged wife’s elementary school classroom and opened fire without saying a word, killing her and an 8-year-old student and wounding a 9-year-old before fatally shooting himself, authorities said.

Some six weeks earlier, 53-year-old Cedric Anderson was a newlywed calling his 53-year-old wife Karen Smith an “angel” in one of many social media posts professing his love.

San Bernardino police have said nothing of what might have motivated Anderson to open fire in the special-education classroom at North Park Elementary School on Monday.

“No one has come forward to say they saw this coming,” police Chief Jarrod Burguan said, though Anderson had a history of weapons, domestic violence and possible drug charges that predated the brief marriage.

Classes at North Park were canceled on Tuesday and Wednesday. Counselors were made available at a nearby middle school for students, family and staff.

The shooting came 15 months after a terror attack in San Bernardino that killed 14 people and wounded 22 others at a meeting of county employees. Husband-and-wife shooters Syed Rizwan Farook and Tashfeen Malik were later killed in a gunbattle with authorities.

Nine-year-old Marissa Perez said she got under a table as soon as she saw the gunman enter her classroom Monday.

“She keeps telling me ‘My teacher got shot, my friend got shot,’” her mother, Elizabeth Barajas, said as she clutched her daughter’s blood-stained sweatshirt.

Marissa said the shooter didn’t speak as he began shooting. One of her friends was hit, she added, pointing to her abdomen. 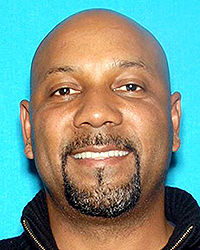 What appears to be Anderson’s Facebook page features many public declarations of love for Smith between statements of religious devotion before his last public post on March 15.

“She knows when to ignore me,” Anderson said with a laugh in a short video posted Feb. 27. “Well, it makes a happy marriage.”

Anderson had posted that he “loved being married to Karen Smith-Anderson!” and shared a photo of the two of them on March 4 during what he described as a date night.

The page also had several photos of his wedding to Smith and their honeymoon among the scenic red rocks of Sedona, Arizona.

But Smith left him about a month and a half after their late-January marriage, police and family members said.

Smith’s mother, Irma Sykes, said her daughter had been friends with Anderson for about four years before they got married.

“She thought she had a wonderful husband, but she found out he was not wonderful at all,” Sykes told the Los Angeles Times. “He had other motives,” Sykes said. “She left him and that’s where the trouble began. She broke up with him and he came out with a different personality. She decided she needed to leave him.” She did not elaborate further.

Sykes said her daughter was a dedicated teacher who took up the profession about 10 years ago after her four children grew up. 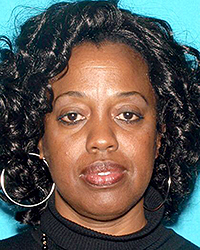 School staffers knew Anderson, who followed the proper protocol and got into the school through the front office by saying he had to drop something off for Smith, school district officials said.

Smith was his target and the two boys were hit as he was firing at her, the police chief said. Anderson emptied and reloaded the gun before turning it on himself.

There were 15 students in the special needs classroom ranging from first to fourth grade, along with two adult aides, Burguan said.

Eight-year-old Jonathan Martinez was airlifted to a hospital, where he was declared dead. The 9-year-old boy, whose name was not released, remained hospitalized Monday night.

The 600 other students at the school were bused to safety at California State University’s San Bernardino campus, several miles away, after many walked off campus hand-in-hand, escorted by police.

Panicked parents had to wait hours before being reunited with them at a nearby high school.

Holly Penalber, whose 9-year-old son and 7-year-old daughter attend the school, called it “every parent’s worst nightmare.” She said the long wait was “frustrating but also understandable.”

Once a major rail hub and citrus producer, the city of 216,000 people filed for bankruptcy in 2012 after struggling to pay its employees despite steep cuts to the budget. It was hit hard by the great recession, seeing rises in unemployment and violent crime.

An overflow crowd gathered at sunset at Our Lady of the Assumption Church in San Bernardino to mourn and pray for the victims and survivors of Monday’s shooting. One man wore a shirt that read “stop the violence in SB.”

“Sometimes all we can do is cry. And today is the day for that,” Bishop Gerald R. Barnes told the gathering. “We’ll get up again. We’ll move on. We’ll become stronger. But today is the day to cry.”