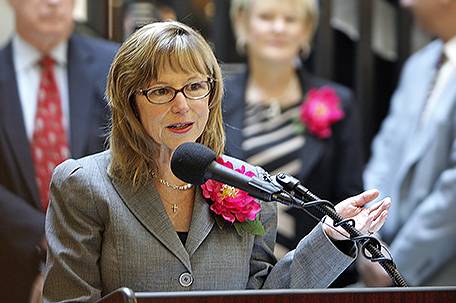 ABOVE PHOTO: District Judge Jean Boyd speaks before the National Adoption Day audience  in Nov. 2012 at the Tarrant County Family Law Center in Fort Worth. A 16-year-old boy was sentenced Tuesday, Dec. 10, 2013, in a Fort Worth juvenile court to 10 years of probation after he confessed to intoxication manslaughter in the June 15 crash on a dark rural road, that killed four pedestrians. Prosecutors had sought the maximum 20 years in state custody for the teen, but his attorneys appealed to state District Judge  Boyd that the teenager needed rehabilitation not prison, the Fort Worth Star-Telegram reported.

Saturday night, I made what might be one of my most emotional appearances ever on CNN’s “AC360.”  I’ve appeared on Anderson Cooper’s show more times than I can remember, but this was an appearance that I will never forget.

The situation revolved around a discussion of “Affluenza,” a (fictitious) condition in which a person’s wealth makes them incapable of understanding the consequences of their actions.  The defense was used in the case of 16-year old Ethan Couch, who got drunk, got behind the wheel, and proceeded to killl four people.  He also paralyzed one of his friends, who was riding in the back of the truck.

Couch had a blood alcohol level that was three times the legal limit when he killed those people that night.  For some reason, Judge Jean Boyd bought the Affluenza defense (which is not recognized by the American Psychiatric Association), and gave Couch 10 years probation right after the perpetrator had delivered the death penalty four times and sentenced a 16-year old kid, Sergio Molina, to almost complete paralysis (he communicates only by blinking his eyes).

A petition has been filed on Change.org calling for Texas governor Rick Perry to remove Boyd from the bench.  I am going to sign that petition.  I also appreciate Anderson Cooper for speaking up on the injustice during multiple CNN segments and pointing out the judge’s disturbing and discriminatory history.  Judge Boyd once gave a 10-year sentence to a teen who punched someone who died after falling and hitting his head.

This case is even more sickening when one considers how often serious psychological problems are not taken into consideration when the cases involve poor, Black or brown people.  How often do our kids commit crimes after being victims of years of abuse, neglect, hunger, miseducation and dire poverty?  When my deceased uncle/older brother figure was sent to prison, I never once heard a judge consider the fact that he suffered from severe mental illness all throughout his life.  In fact, going to prison only served to worsen his mental illness, not make it better.

The very idea that this kids’ wealth was turned into a convenient liability lies in contradiction to the fact that his wealth has always been a tremendous asset.  It’s allowed him to get whatever he wants, whenever he wants.  But when the spoiled rich kid’s actions finally catch up with him, the very thing that’s given him an advantage is suddenly considered to be a huge disadvantage.

When we spoke on the CNN segment, I thought about the individuals I know personally who received far harsher sentences for even the pettiest crimes.  I think about a friend of mine, Darrell Padgett, who received a 40 year sentence for possession of one gram of crack cocaine.  I think about the individuals I’ve seen emerge from prison with severe mental illness after years of torture while in state custody.  There is also the 16-year old kid, Kalief Browder, who was starved half to death in Rikers Island while being held without charge for a crime he didn’t commit.

Mind you, not every judge is as corrupt and misguided as Boyd.  But the case struck a chord with those of us who are sick and tired of seeing our children treated like animals while wealthy children receive a slap on the wrist for even the worst offenses.  On the Syracuse University campus where I teach on Friday nights, the rampant drug and alcohol abuse will likely never receive the same police scrutiny that it might get if the offenders were African Americans in public housing.  Police are rarely going to stop and frisk a rich White kid, yet even the tiniest imperfections of Black youth are scrutinized beyond comprehension.

The best way to cure Couch’s Affluenza is to subject him to a fate only slightly better than his victims.  I’m not sure I’d go as far as giving him the same death penalty he doled out that night during his drunken joyride, but a decade in state prison might give him just the kind of treatment he deserves for what he did to those people. Also, the deprivation of wealth and privilege might help him understand that there are indeed consequences to his actions, effectively curing him of the ailment that has left him so “disadvantaged.”

This case wasn’t just sad for the families of the victims, it was sad for all of us.  It also shows that the entire criminal justice system itself suffers from a severe case of Affluenza:  Justice for the White and wealthy is both separate and unequal, especially in the state of Texas.

Dr. Boyce Watkins is the author of the lecture series, “The Eight Principles of Black Male Empowerment.”